This valley is about 3.5km along the Azuma River in Gunma Prefecture. You can see the beauty of the valley, such as overhanging cliffs, strangely shaped rocks, and waterfalls, after the winding path formed by the river water eroded volcanic lava, a long time ago.
With the construction of the Yanba Dam, Kawarayu Onsen, a hot spring town along the valley, sank in the dam, which had a history from the Kamakura period (1185 – 1333). And Oku-Shimako Lake appeared, which produces a mysterious color that changes many times depending on the amount of light and the time of day. 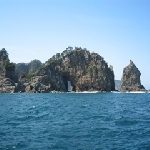 Rikuchu Kaigan National Park runs along the coastline from northern Iwate Prefecture to northern Miyagi Prefecture. Kitayamazaki is a natural scenic spot, with a precipitous cliff, located at the north of the park. Nasu Volcanic Zone has been active for 26 million years and has risen from the sea, parallel to the Japan Trench.
Kitayamazaki is the middle of the plateau, extending from Kurosaki in the north to Bentenzaki in the south. The sculptural beauty of nature, with a height of 50 to 200 m, can be seen from the sea, along with the Black-tailed seagulls. Its beauty is overwhelming. 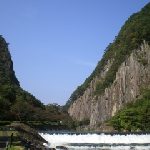 This park is located at Obara, Shiroishi City along the Shiroishi river, which flows as a water source to the southeast, from the Zao Mountain Range. A natural monument, Zaimokuiwa, a rock wall was formed 12 to 23 million years ago, which looks like a huge tree standing vertically. Zaimokuiwa was damaged as much as Shiroishijo Castle due to the East Japan Great Earthquake in 2011, and a part of the rock surface collapsed. Koinobori, carp-shaped streamer, a traditional event to pray for boys to grow up healthy and strong by raising the streamers all over Japan, was sent to support the reconstruction efforts after the great earthquake, and 800 Koinobori are fluttering well in the Shiroishi river, in May. The mind of Oshu (Northern Honshu, the region encompassing Mutsu and Dewa province), which has a high crystal purity, made by an overlapping natural appearance, was revived. 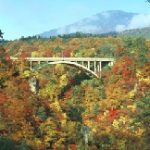 Naruko Gorge is located in Osaki City, Miyagi Prefecture near the prefectural border with Yamagata. It is a natural sculpture created by the Oyagawa River that connects to the Eaigawa River. It represents the elegance of poetic unconventionality, which had been pursued by Matsuo Basho (1644 – 1694), the most famous poet of the Edo period. There are winding mountain streams harmonizing with steep cliffs and random rocks.
Katanuma Lake is a crater lake in the Naruko Volcanic Group, which was dammed by lava flow. It appears a deep mystery on the surface of the emerald green.