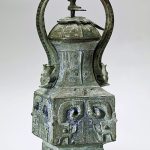 This museum possesses Totetsumon-hoyu, a Chinese ritual bronze vessel, designed with the motif of Taotie, a Monster in Chinese mythology. This work was in ancient China, at the time of the Yin Dynasty, prior to 11 BC. Totetsumon, with the design of Taotie, created characters to keep away disasters and victims.
Dr. Shirakawa Shizuka (1910-2006), an authority of Chinese Characters research, gave lectures on ancient Chinese culture for many years, at this museum. This museum’s collection spans centuries; from ancient Chinese bronze to Ming Dynasty (1368-1644) pottery, Japanese Buddhist crafts and scrolls from the Asuka period (592-710) to the Heian period (794-1185), and Japanese picture scrolls from the Edo period (1603-1868).
This collection provides an outstanding education in Oriental studies to know JAPAN.

Nagaoka is a heavy snowfall area where the Shinanogawa River flows through to the Japan Sea. Nagaoka was rebuilt twice from catastrophic damages, first from the Boshin War (1868-1869), the Japanese civil war between Imperial and shogunate forces, and then during the 2nd World War.
Kawai Tsugunosuke (1827 – 1868), a retainer who served the Makino clan of Nagaoka and a senior military commander of Nagaoka forces in the Boshin War of 1868 – 1869, said “I want to learn practical science”. At 33 years of age, he wandered to the west countries in Japan. He wrote Chiritsubo, travel writing, which still remains.
This museum introduces the philosophy and spirit of Tsugunosuke, who was a commander of the Nagaoka clan, and fought with the government army in the Boshin War, although he understood well the modernization, and strove for it.

This temple was founded by Musou Kokushi (1275 – 1351), a Rinzai Zen Buddhist monk and Kokushi, a national Zen teacher, who built Tenryuji Temple in the first rank of Kyoto Gozan, the five great Rinzai temples of Kyoto. He accomplished this by suggesting the dispatch of Tenryuji bune, trading vessels, to the Yuan Dynasty (1279 – 1368), in order to raise funds to build Trenryuji Temple in the period of the Northern and Southern Courts (1336 – 1392), for the Ashikaga Shogunate.
The party of Soseki met the incarnation of Sacred Kannon, the Buddhist Goddess of Mercy, riding a white horse at the foot of Mt. Nagase, in 1313 and the statue of the Sacred Kannon was left behind. Soseki built Kannon-do, the temple deciated to Kannon, the Buddhist Goddess of Mercy.
The garden in front of the Kannon-do, has the Garyu Ike pond and the Musaibashi bridge, an arched bridge. The scenery of the garden overlaps with the beauty of Karamono Shogon, maestoso things imported from China.

This park is in the site, where many temples gathered. Relocated from Korea. Rokkaku-tei was built by nobles in locations of great scenic beauty, as places for relaxation.
Dokuryu Shoeki (1596 – 1672) was a Zen monk of Obaku sect in China. He fled the war and came to Nagasaki in 1918 at the end of Ming Dynasty (1368 – 1644). And he naturalized to Japan. He greatly influenced the improvement and development of Iwakuni culture in various fields, such as medical science, arts and sciences, and philosophy. There is a monument to him in this park.

Chaushuyama Park overlooks the center of Bizen city and Katakami Bay. The scenery of Shinkoji Temple from the park is also wonderful. This temple has a history from the Nara period (710 – 794), which had a patronage by Okayama Domain during the Edo period (1603 – 1868).
The three-storied pagoda, with a height is 18.2m, was relocated from the ruined temple in Ushimado Setouchi City, in 1613. It’s eaves are strongly curved and become smaller in the upper stories. The pagoda has the special feature in the Muromachi Period (1366 – 1573). 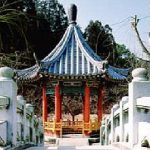 Kurashiki was a Shogun demesne in the Edo period (1603 – 1868), where visiting cultures from overseas had come, since ancient times. It produced excellent human resources, like Kibi no makibi (695 – 775), a Japanese scholar and noble who played the role of connecting with the Chinese Continent in the Asuka period (550 -710), and Nara period (710 – 794).
Makibi worked on the construction of the nation based on the Ritsuryo system, a system of centralized government based on Ritsu, a criminal code and Ryo, an administrative code. He had the patronage from Emperor Shoumu (701 – 756), and Empress Komyo (701 – 760), the consort of Emperor Shoumu.
This park is a memorial to Makibi, who had learned and refined his insights beyond the difficult sea while on an envoy ship to the Tang Dynasty (618 – 907). The Memorial Hall, in the style of the Tang Dynasty, introduces Makibi, who invented Kata-kana, a writing system based on Japanese syllabary, and spread Igo, the board game of capturing territories, to Japan. 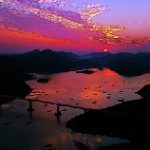 The far view from Katakami Ohashi Bridge is splendid. It is a steep and soft landscape, layered with the mountains and the sea, and looks down on Mt. Yudachi Ukeyama, where the Senkandaki, the ceremony that prays for rain. Kenmon Taisei, the system in the Japanese Medieval Ages by which governance was shared by the manorial system among ruling elites.
The courtier, the samurai and the shrine and temple, was established in the Muromachi Period (1366 – 1573). The beauty world of Karamono Shogon, maestoso things imported from China, as the standard of the beauty, was also established in the Muromachi Period.
The goods from the Song Dynasty (960 – 1279) and the Ming dynasty (1368 – 1644) were actually transported via the sea route overlooking this bridge, which connected Hakata, Fuokka, Kyushu region and Sakai, Osaka, Kinai region, provinces surrounding Kyoto and Nara. 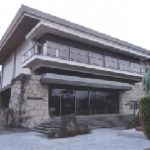 This museum possesses the collection of the Date family, which ruled Uwajima Domaine from Date Hidemune (1591 – 1658), a feudal lord, the 1st lord of Uwajima Domain, to Date Munee (1830 – 1906), the 9th lord of Uwajima Domain. Uwajima Domain was started by Hidemune in 1614. Hidemune was the eldest son of Date Masamune (1567 – 1636), a Japanese feudal lord, the founder and the first lord of the Sendai Domain.
This museum introduces the beauty of the Date family style, which had been handed down from Masamune, through pieces like Tensho Makie, gold lacquer in the Tensho period (1573 – 1592). On that Makie, the state of blooming chrysanthemums was well drawn.
This museum also introduces the days of the end of the Edo period, with the Arrival of Matthew C. Perry (1794 – 1858), a Commodore of the United Sates Navy, who played a leading role in the opening of Japan.

Takeo used to flourish as a postal town on Nagasaki Kaido, the main road that connected Sanyodo Road, from Nagasaki and had 25 postal towns, during the Edo period (1603 – 1868). At that time, Nagasaki was the only place that permitted diplomacy during the Tokugawa shogunate’s isolation policy. Nabeshima Shigeyoshi (1800 – 1863), the 28th feudal lord of Takeo, collected Dutch books on medicine, science, navigation, military studies, and encyclopedias in Nagasaki.
This museum is located near the Takeo Onsen Station. This museum possesses 128 Dutch books, glassware for physical and chemistry experiments, a celestial globe, a terrestrial globe, and a western style cannon, bronze mortar, and the first original cannon of Saga Domaine, which conveys the days. 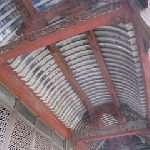 Saito Mokichi (1882 – 1953), a Japanese poet and a psychiatrist, visited this temple, called as Karadera, a Chinese temple. He stayed in Nagasaki as the professor of Nagasaki University Hospital, during three years and three months. He mentioned this temple, in the summer, in his poem, “In the calm after noon in the summer at Karadera in Nagasaki, miscellaneous thoughts came up, which could not stay in mind by the white blossom of crape myrtles in the garden.” This temple is fascinating in the afternoon in the summer, when there are fewer visitors.
Over the Sanmon, temple gate, this temple remains in the architectural style and the remnants of Ingen Ryuki Zenji (1592 – 1673), a poet, calligrapher and monk who found the Obaku sect of Zen in Japan. Those came from China.
You can experience the culture of the Obaku Buddhism sect, introduced to Japan from China during the Ming Dynasty (1368 – 1644). This greatly influenced Japanese early modern painting, including the Kanou School 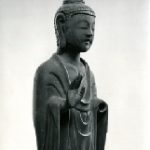 This temple is the oldest temple in Goto Islands which was the last port of call of Kentoshisen, an envoy ship that travelled to the Tang Dynasty (618 – 907) in Japan. In 806, Kukai returned from Tang and prayed here that the Esoteric Buddhism he had learned in Tang, could be useful for the nation and the people.
Two statues of Buddha designated as cultural property are enshrined in Goma-do, a hall to conduct goma (Fire Ritual). One of them is a wooden statue of Amida Nyorai, the principal image of Buddha in Pure Land, in the traditional Japanese-style, which is presumed to be the statue made in the end of Heian period (794 – 1185).
Another is a National Treasure, a bronze statue of Yakushi Nyorai, the Buddha of Healing, in the style of the Nothern Wei Dynasty (386 – 535), which is presumed to be a statue made in the Asuka period (550 -710). Currently, they are Hibutsu, hidden Buddhist images, ordinarily withheld from public view.

Nagasaki Bugyosho, The Japanese Government of Nagasaki was restored at Nagasaki Museum of History and Culture, which introduces historical materials such as Fumie, a loyalty test. Shoin, the drawing room or reception building and Oshirasu, a court of law, were restored there, too. Nagasaki Bugyosho was established in Tateyama Town Nagasaki, in 1592 during the Azuchi-Momoyama period (1573 – 1603). It had the responsibility for the administration, judiciary, diplomacy, trade, and military in general, as well as for the control of Christianity and smuggling.
Sakamoto Ryoma (1836 – 1867), a low-ranking samurai from Tosa Domain, who was influential to the Meiji Restoration, the establishment of the Empire of Japan, investigated the murder of a British warship sailor. Ryoma organized Kaientai, the association that managed trade and naval activity at the end of the Edo period, in 1865. A member of Kaientai was a suspect in the murder investigation. Ryoma negotiated well about the suspicion at this Nagasaki Bugyosho.

This cape is located at the southernmost point of the Tanegashima island, where the ship from Ming Dynasty (1368 – 1644) drifted ashore, 1543. It was said this ship sailed from Shangchuan, Guangdong, China, where Franciso de Xavier (1506 – 1552), co-founder of the Society of Jesus and the first Christian missionary to venture into Japan, died. At that time, the first Hinawajyu matchlock gun arrived in Japan from Portugal.
There is Teppouenraikikouhi, the monument of the first arrival of guns in Japan, and the observatory, which imitated Nanbansen, the early European galleon ships, and has the view of the Kuroshio, the Japan Current that opened the early modern time in Japan, with guns.
In 6 years after the first arrival of Hinawajyu in Japan, Oda Nobunaga (1534 – 1582), the legendary warlord and the military dictator, ordered 500 Hinawajyu for Kunitomo Village Omi Province, Shiga.