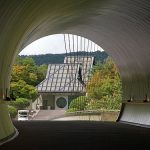 The museum is located near to the historical site of Shigaraki Royal Palace, built by Emperor Shomu. Shomu embraced the idea of having the country learn the culture of the Silk Road and the institution from the Tang Dynasty (618 – 907). Gandhara is where ethnic groups of the Orient, India, and the western region of China exchanged goods and services.
A 2.5m tall Buddha statue is in this museum’s possession. It is one of the largest figures of Gandhara Art. The downcast eyes of this statue tell the fact that this statue used to be worshiped widely on the high base. The downcast eyes overlapped also representative of an ideal of the Tenpyo Period (729-749) under Emperor Shoumu (701 – 756). 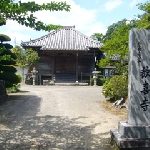 Aridagawa Town is the birthplace of Myoe Shonin (1173 – 1232), a Japanese Monk, and the originator of the restoration of the Kegon Sect, who founded Kosanji Temple. There are Kishuu Hasho Iseki, 8 sites associated with Myoe Shonin in Kii Province, Wakayama, including the ancient Kangiji Temple, founded by Eshin Sozu Genshin (942 – 1017), the 18th head of the Enryakuji Temple.
Genshin compiled Ojoyoshu, “Essentials of Birth in the Pure Land”, and the Hoshio Site, where Myoe Shonin had the oracle of Kasuga Myojin, the deity of Kasuga Shrine, Nara.
The Myoe Shonin records the dream he had. He loved the moon and made poems about the moon. In addition, his maternal family, the Yuasa clan, was connected to the Kamakura Shogunate and he interacted with Unkei (1150 – 1223), a Japanese sculptor of the Kei school, and his son. They deepened the Buddhist faith in Arida Wakayama. 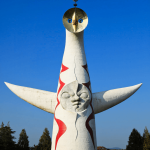 This museum opened after the Osaka World Expo in 1970. It exhibits and introduces the cultures of the world’s peoples, centering on statues of gods, masks and daily necessities of the world gathered at the World Expo Theme Pavilions. — The diversity and commonality of human culture. At the West Asia gallery of this museum, camel tools and equipment used by Arab Bedouins are exhibited.
In Western Asia, also known as the Middle East, the people of nomadic livelihoods had crossed the desert. They called North Africa “the land of the sunset,” with which they had close relations, and they called the land they live as “the land of the rising sun”.
– In 607, the Prince Shotoku (574 – 62２) sent an envoy ship to the Sui Dynasty (581 – 618) with a sovereign letter. In the sovereign letter, it was described that the Emperor of “the land of the rising sun” (in Japan) sent it to the Emperor of “the land of sunset” (in China).

This temple was founded by Kobo Daishi Kukai (774 – 835), the founder of the Shingon sect. The wooden statue of Yakushi Nyorai, the Buddha of Healing is a Prefecture designated cultural property. Taishi-den, another worship hall of this temple has the view of the entire Tomoura port, where the envoys from abroad visited in the Edo period (1603 – 1868).
Philipp Franz von Seybold (1796 – 1866), German physician, botanist and traveler, who studied Japanese flora and fauna and introduced western medicine in Japan, climbed there and saw it. Seybold was the German physician of the Dutch East India Company in Nagasaki, who accompanied the Dutch trading house’s curator to Edo, Tokyo in 1826. He investigated the geography, climate, plants and astronomy of Japan, during those travels.
And this lead to the Seybold Case in 1828, when Seybold tried to take out of the country, state-banned maps of Japan.

This museum opened in 2005, as a museum to convey the history of exchanges between Japan and Asia, which is located in the hilly area owned by Dazaifu Tenmangu Shrine in Dazaifu City Fukuoka Prefecture.
It exhibits a large number of masterpieces, such as Tosen, Nanbansenzu folding screen. (Nanbansenzu folding screen shows the beginning of Westernization in Japan by drawing the arrival of merchants and missionaries mainly from Portugal in the 16th century).
On the right screen, the black Nanbansen, the early European galleon ships, arrived Japan. Another screen depicts the party of Capitan Mor, a commander of Portuguese fleet, who went to Nabanji, a Christian church, built in Japan in the 16th century.
On the left screen, there is the white Tosen, a ship of the Ming dynasty (1368 – 1644), and the port town of China.
It is a very unique Nanbansenzu folding screen, with two drawings of departure. 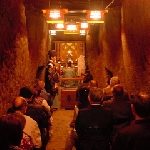 In the site of Miyajidake shrine are the Miyajidake Tombs. These are known as the “Underground Shosoin (Imperial Treasure House)” and were a megalithic burial mound from the end of the 6th century to the early 7th century.
The stone chamber, with a total length of 23m, consists of huge stones exceeding 5m in height and width. About 300 items were discovered, including harnesses, swords, green jade balls and glass plates.
National Treasure Gilt Bronze Tsubo Abumi and pot stirrups, exhibited at the Kyushu National Museum, are decorated with palmetto patterns and show their connection with the Silk Road. Horyuji Temple and Shosoin possess similar items, too. 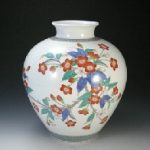 The first porcelain production in Japan started in 1616 in Arita Town Saga. Later, the 1st Sakaida Kakiemon (1615 – 1653), a Japanese potter succeeded in Akaetsuke, a porcelain decorated with a colorful painting overglaze, in traditional Chinese style, and established the Kakiemon style.
It features a bright, delicate, and pictorial composition with ample blank space on a soft, warm base like rice-washed water, called Nigoshide, a milky-white porcelain. You can enjoy well the Kakiemon style which, Meissen, the sister city of Arita, has always aimed for.

The Tara Kaido in the region on the Ariake Sea was the road leading to Nagasaki. The starting point was Shirota Post Town in Ureshino City, Saga Prefecture, which went up the Shiotagawa River from the Ariake Sea. Shirota Post Town is a free-spirited merchant town, unlike a castle town, with many white-walled town houses and warehouses that still remain to convey its history.
There is a village along the mountain, which has a group of historical sites that show where Christians fled to escape persecution. Nagasaki Kaido, the main road, which connected to Sanyodo Road from Nagasaki, had 25 post towns, where civilizations commuted, interweaving brightness and darkness.

Sakamoto Ryoma (1836 – 1867), a low ranking samurai from Tosa Domain, who influenced the Meiji Restoration, the establishment of the Empire of Japan, was investigated in the murder of a British warship’s sailor, by a member of Kaientai, a trading, shipping, and private navy company, founded by Sakamoto Ryoma.
He negotiated with the officer of the Nagasaki magistrate’s office. This museum was built at the site of Nagasaki magistrate’s office, which was located in Tateyama Town along Nagasaki Kaido, main road, which connected the Sanyodo Road, from Nagasaki and had 25 post towns.
This museum introduces the restored Nagasaki magistrate’s office and Nagasakiha, the style of painting by painters based in Nagasaki, the only gateway abroad during the Edo period (1603 – 1868).
It includes the painting of the Obaku sect of the Zen sects in Buddhism, which was introduced to Japan from China during the Ming Dynasty (1368 – 1644), Kanga, Chinese style painting, and western style painting, such as Nanbanjin Raichozu folding screen, to show the beginning of Westernization in Japan by drawing the arrival of merchants and missionaries, mainly from Portugal, in the 16th century.

The 28th head of the Shimazu family, Shimazu Nariakira (1809-1858), felt a sense of crisis in the advancement of powerful Western countries to Asia, So, he built modern, Western-style factories, such as a reverberatory furnace, to make cannons and glass, at the place adjacent to the Shimazu family villa, Sengan-en Garden. It was there that Nariakira also made the first gas lamp in Japan.
He also developed Satsuma Kiriko, cut glass, as a foreign trade item. The feature of the cut glass is a special gradation to express the delicate Japanese sensibility, which originated from the ancient Silk Road and spread to the modern UK and China. Nariakira put a priority on the culture, as same as on the arms, for the future of Japan.

Ibusuki, Kagoshima has been opened to abroad geographically. This museum in Ibusuki exhibits 3,000 works of art, which shows the history of Satsuma Province Kagoshima as having been transformed by accepting various overseas cultures as the southern entrance to Japan.
This work is made in the late 19th century, between the last days of the Tokugawa shogunate and the Meiji Restoration, an event that sectored practical imperial rule of the Empire of Japan in 1868 under Emperor Meiji. It was made using the method called Nishikide, a white porcelain glaze, painted with opaque red, and transparent green, yellow, purple, and blue glaze.
This method is common to old Imari, Saga, the porcelains traded by the East India Company.