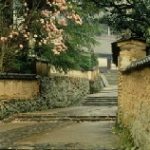 The museum was opened in 1992, upon the death of Irie Taikichi (1905 – 1992), a Japanese photographer. There is Taikichi’s “Harumeku Nigatsudo Urasando, at the beginning of spring, the rear approach to the Nigatsudo Hall of Todaiji Temple.” Irie shot this location many times for revised versions of the best selling book “Koji Junrei”, A Pilgrimage to an Ancient Temple by Watsuji Tetsuro (1889 – 1960), a Japanese moral philosopher and cultural historian.
Tetsuro wrote the book in his twenties, after he saw the reproduction of Ajanta Cave India at his friend’s house. Watsuji visited Toshodaiji Temple, Yakushiji Temple, Horyuji Temple, and Chuguji Temple in Nara, and other temples near Nara. He wrote down their impressions with passion about the history of the establishment of early Buddhist art from the eastern influence of Greek culture.
And Irie said, “The rusty sight of this approach gives you a feeling of the ancient capital of Nara.” Irie shot the scenery, Buddhist statues, and events of Nara Yamatoji (the roads to Nara). His starting point was the standing statue of Shitenno, the Four Guardian Kings, enshrined at Hokke-do Hall of Todaiji Temple, which was rumored to have been confiscated by the United States after the World War II.

The Niigata Prefectural Museum of Modern Art possesses works of the Barbizon school, Navi school, and German expressionism. The museum also features domestic works since the Meiji period (1868 – 1912) that trace the modern times, and many works of the artists from Niigata Prefecture, such as the master of Japanese painting, Tsuchida Bakusen (1887 – 1936), Kobayashi Kokei (1883 – 1957), and Yokoyama Misao (1920 – 1973). “Zansetsu, the remaining snow
– Sato Tetsuzo”. Sato Tetsuzo (1910 – 1954) won the highest prize in succession at Kokuten (Kokugakai), Japanese artists association, but continued his life’s work out of power. He symbolically portrayed the local climate and people, and also worked hard to teach children painting and local cultural activities. 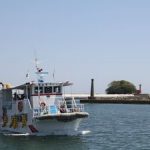 Himi seashore has a beautiful, varied coast, from Matsudae Nagawaha in the south, with its sandy seashore dotted with pine trees, to Nadaura seashore in the north, and its Araiso, rocky shore. Tateyama Mountain Range stands like a folding screen out at the sea of Himi. There is a rare view of the mountains over the sea.
Through the Himi-oki Cruise Tour, you can enjoy the mysterious scenery of Japan’s Top 100 sunrise viewing sites, with the long-worshipped Tateyama Mountain Range in the background. The mysterious scenery includes the site of Aojo Castle, with its spectacular rock surface and large permanent shore net.

The museum possesses collections of Kanou Hogai (1822-1888,), who created the earliest modern Japanese paintings, and exhibits works related to the history of the region.
Okajima Tatsugoro, born in Ono Fukui during the Meiji period (1868 – 1912) , studied casting at the Tokyo School of Fine Art and operated an art trading business in New York. As a metalwork artist, he had an aesthetic eye backed by deep knowledge and experience. The Okajima Collection, consisting of gold-copper Buddha, sword ornament, smoking utensils, currency etc. is a must-see.

The Nagaragawa River is one of Japan’s three major clear streams, and originates from Mt. Dainichigatake in Gujo City. The Nagaragawa Railway runs along the Nagara River in Okumino, which is full of rustic flavor.
The train runs the Pass between the Yamada Station and the Tokunaga Station, where there is the shrine of Mt. Hakusan and the Village of Kokin denju, the initiation to the interpretation of Kokin Waka shu, Imperial anthology from the 10th century.
You can meet the richness of Japan that has been handed down, such as the river that inhabits the red-spotted masu trout, the rural landscape on the bank, the refreshing shrine forest, and the cherry-colored haze on the plain at the foot of Shinowakijo Castle. 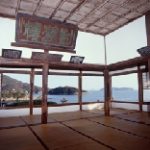 This temple, founded in the Heian period (794 – 1185), has a famous Kyakuden, reception hall, Taichoro, meaning a tide viewing hall, adjacent to the main hall. Taichoro was built during the Genroku era in the Edo period (1688 – 1704), as a Reception Hall for the Chosen Tsushinshi, Envoys from Korea for Peace Building and Cultural Exchanges between Korea and Japan from the 17th to 19th century.
The envoy praised that the prosperity of Osaka at that time was higher than that of Beijing, China, and that the view from Taichoro, was the most beautiful scenery in the region east of Korea. In 1748, a senior envoy, Hong Gye-hui (1703 – 1771) gave the name of Taichoro to this hall and his son, Hong Kyung-hae, left calligraphy writing at this hall.

Mt. Fudekageyama (Height 311m) has the view of the beauty of the archipelago in the Seto Inland Sea. There are about 2000 cherry trees in the spring, hiking from summer to autumn, and the sea fog in the winter is exceptional.
This mountain has seen so many things. The voyage of the ship of an envoy to Tang Dynasty (618 – 907), and Kitamae-bune, cargo ships that sailed the Japan Sea during the Edo period (1603-1868). Chosen Tsushinshi, Envoys from Korea for Peace Building and Cultural Exchanges between Korea and Japan from the 17th to 19th century. Ryukyu Shisetsu, the mission from Ryukyu Domain to Edo. Periodic diplomatic visits to the Tokugawa Shogunate in Edo, and the group of curators of the Dutch trading house of the Dutch East India Company, that visited the Tokugawa Shogunate in the Edo period.
The mountain was named by Rai Sanyo (1781 – 1832), a Japanese Confucian scholar, historian and Imperialist who supported emperor-centered nationalism at the end of Tokugawa Shogunate period. Sanyo named it by overlapping the shape of the mountain shadow in the sea with a drawing brush. It was his wit. 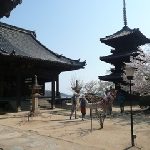 This area had been the place of a port for awaiting a favorable tide and wind since ancient times. Chosen Tsushinshi, (Envoys from Korea for Peace Building and Cultural Exchanges between Korea and Japan from the 17th to 19th century), including Kaito-ken-sakkanshi, Envoys from Korea that replied to a sovereign letter, visited the port during the Edo Period.
This temple was founded as a base for missionary work in the western part of Japan by the Nichiren (1222-1282) sect of Buddhism, in the period of the Northern and Southern Courts (1336 – 1392). It became the reception place and accommodation for Chosen Tsushinshi, along with Fukuzenji Temple at Tomo Hiroshima and Seikenji Temple at Okitsu Shizuoka in the Edo period (1603 – 1868).
The calligraphy written by the Communication Envoy and celadon porcelain vase from Korea, were handed down at this temple, showing that the scenery and appearance were excellent.

Kibi Province, Okayama was a key artery that connected the culture with the Chinese continent and the Korean peninsula since ancient times. The road of Tatara, an iron manufacturing method that uses iron sand from Izumo Province, Shimane to the Chugoku Mountains. The sand went by Takasebune, flatboat, down the Yoshii River from Chugoku Mountains to the south near the consumption area.
Today, the JR Inbi Line connects Tottori and Tsuyama City Okayma, instead of the Yoshii River. This station is the first station in Okayama, passing over the Monomi Pass, which is the prefectural border between Tottori and Okayama.
The scenery of Sotoyama, the village at the foot of the mountains, and the river from the station building on the hill, is the original scenery of Japan and is also the path of ancient history. 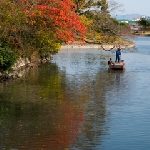 This sailing Boat takes you around the canal by Donko Bune, traditional Canal Boat. Along the canal ditch, the green of weeping willows shine. Namikura Red Brick Warehouse, and Namako-Kabe, the walls covered with square tiles jointed with raised plaster create relaxing shadows. You can also see closely Kumode-ami, traditional Net fishing. This boat ride lasts 70 minutes.
Tachibana Muneshige (1567 – 1643) , was a feudal lord, the 1st lord of the Yanagawa Domain. He was defeated in the Battle of Sekigahara in 1600 and his domain was confiscated. He became Ronin, a free-lance Samurai in Edo, by refusing the offer of finding a new lord. After returning to the former territory, he attended Tokugawa Iemitsu, the third shogun (1604 – 1651) at a tea ceremony.
He also participated in the Shimabara Rebellion (1637 – 1638). His honorable lifestyle mirrors the scene of the canal, not limited to one view. 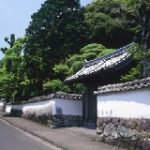 Kunikida Doppo (1871 – 1908) is a great writer of the Meiji period (1868 – 1912), the pioneer of naturalism, and the founder of Fujin Gaho – Japanese Lady’s Graphic. Doppo loved very much the castle town at the foot of Mt. Shiroyama in Saeki City. He described the path of the town at Azamukazarunoki – the diary of Kunikida Doppo, where he walked many times.
The path became The Path of History and Literature, with the residence of a high ranking samurai and a white earthen wall line from Otemachi, Saeki City along the foot of Mt. Shiroyama. The path is also an example of the beauty of modeling that overcomes Karagogoro – Chinese influence, and Western influence.

This sea, which spans the Kumamoto and Kagoshima prefectures, is surrounded by the Amakusa Islands. It is connected to the Ariake Sea in the north and the East China Sea in the south. In ancient times, on the Shiranuikai, it is said that a mysterious fire appeared on the dark sea. The legend states that a sailor would arrive at the port safely when he sailed the boat toward the fire.
You can experience the richness of the Yatsushiro Sea, by wind force, on a fishing boat at Ashikita Town, which has the Utaseami-amigyoho. It is a traditional fishing method, from the mid-19th century, which catches seafood by pulling fishing nets with wind force, which comes from stretching two or three sails parallel to the boat’s hull