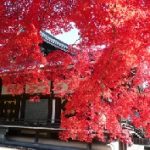 The Tokugawa shogunate developed this temple’s cathedral. When the Imperial Palace was rebuilt during the Kanei period of the Edo period (1603 – 1868), Shishin-den, the hall for state ceremonies, and other buildings were relocated to this temple. In the national treasure Kondo, in the main hall of this temple, appears the court architecture of the early modern days.
This Reihokan, Sacred Treasure Hall, exhibits the cultural assets to show the history of faith in the imperial family, court nobles and samurai class for over 1100 years. The national treasure image of Kujyaku Myoo, the Peacock King statue with three faces and six arms (northern Song dynasty in the 11th Century), is refreshed and intelligent. The featured peacock feathers are realistic, and its iconicity is extraordinary. 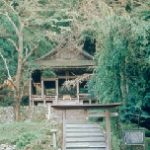 This shrine possesses the National Treasure Gilt bronze Kyozutu, scripture cylinder of Fujiwara no Michinaga, which is a cylindrical container in which sacred scriptures are placed and is made of malleable bronze with plating.
Fujiwara no Michinaga (966 – 1028), a Regent controlling the sovereign through matrimonial links to the Emperor, buried this Kyozutu. After this, Fujiwara no Shoshi, the elder daughter of Fujiwara no Michinaga, had long-awaited an Imperial prince, Emperor Goichijo (1008 – 1036), who entered into the Palace to marry with Emperor Ichijou (980 – 1011).
The letters in this Kyozutu, are thought to be written by Fujiwara no Yukinari (972 – 1027) who was one of Sanseki, the three great calligraphers in the Heian period, in the 10th century.
This Kyozutu, scripture cylinder was derived from the pipe made of gunmetal, which was a bearing for an axle of an ox carriage, used by aristocrats in the Heian period.

This temple is located on the mid-slope of Mt.Shikisan, at the southern end of the Ikoma Mountains, bordering Yamato Province, Nara and Kawachi Province, Osaka. It is the Shingoshu Juhachi Honzan, the 18 Head Temples of schools in the Shingo sect.
This temple has enshrined Bishamonten, Guardian god of Buddhism, since the Asuka period (550 -710). Myoren Shonin, a monk who was the originator of the restoration of Chogosonshiji Temple, and the main character of “Shigisan Engi Emaki, a picture scroll depicting the stories about Mt. Shigi.” He had prayed for the recovery from illness of Emperor Daigo (885 – 930).
This temple became Kigansho, a temple for the Imperial Court to pray for comfort, home land protection, and long lives of descendants, since the prayer for Emperor Daigo in the Heian period (794 – 1185). The Chinese characters of those three prayers, “Cho”, “Go” and “Son-shi,” became the temple’s name.
The Kaizando, the hall dedicated to the founding priest, enshrines together and remembers the illustrious memories of the Prince Shotoku (574 – 622), as the Founder, Myoren Shonin, as the originator of restoration, with Kanzan Shonin, and Kobo Daishi Kukai (774 – 835), the founder of the Shingon sect. 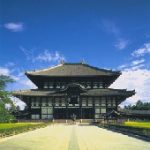 After the Heike (Taira) clan’s south capital burning in 1180, the hall of the Great Buddha was restored with a structure adapted from the Song dynasty style, by Chogen (1121 – 1206), a Buddhist priest serving to collect donations for this restoration.
The craftsmen participated in this restoration, used a hybrid style. At various places, there are narrow posts, a low ceiling, and a calm space, in the Japanese style. The present hall was restored in the Edo period (1603 – 1868), which was built in the hybrid style of the Song dynasty style and the Japanese style.
-As Civilization and Pandemic from the Silk Road, prosperity was also accompanied by calamity.
—The main principle of Todaiji temple is the Great Buddha, Vairocana-Buddha, which means ” shining the light all over the place”, and is considered to be the universal Buddha in the Avatamsaka Sutra.
—The Mandala of Kobo Daishi Kukai (774 – 835), the founder of the Shingon sect, is at the base of this universal Buddha. 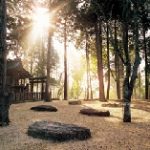 The decree to construct the Great Buddha of Rushanabutsu, Vairocana, was applied at Shigaraki no miya Palace, in 743, and the construction of Kokatera Temple began. Emperor Shoumu (701 – 756) hoped that the palace would be the capital of Buddhism and was passionate about its construction. But his thoughts were not realized at that time.
The emperor built the Great Buddha of Todaiji Temple Nara and completed his passion in 752, after returning to Heijyoukyo Nara. Currently, Kokatera Temple Site, about 3.3 ha, is designated as a national historic site, and more than 300 cornerstones remain in the hills, and the scenery of the past remains in the pine forest.

Kobo Daishi Kukai (774 – 835), the founder of the Shingon sect, said that he would definitely return after 5,670 million years, and was dead at the age of 62 in 835. The path of about 2km from Ichinohashi of Okunoin Temple to the mausoleum of Kukai is full of calm air.
Kukai traveled by an envoy ship to the Tang Dynasty (618 – 907), received the Esoteric knowledge, developed Mt. Koya (Height 800m) to resemble Hachiyo-renge, lotus flowers with eight leaves, and built the field of Mandala, a geometric configuration of symbols used as a spiritual guidance tool in Buddhism in Japan.
You can also feel the Current of life and consciousness of Kukai, which moved northward to East Asia. 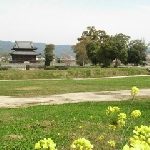 The Kii Kokubunji Temple site is one of the 60 Kokubunji Temples built, across the Provinces. These were state-supported, by the imperial decree of Emperor Shoumu (701 – 756) in 741. The foundation stone of the seven-storied pagoda remains from the original.
The tombs along the Kinokawa River conveys the glory of the powerful family. The gorgeous excavated burial accessories, such as golden Magatama, the ancient Japanese ornamental stone, harness the connection with the Korean Peninsula.
The Kii family was Kuni no Miyatsuko, a regional administrator, and served Emperor Nintoku in the 4th century. Nintoku was the prince of Emperor Ojin, and Kawachi Dynasty in the 5th century, which was based in the Uemachi plateau, overlooking Osaka Bay.
It is said that the founder of the Kii family was Tekeushi no Sukune, a legendary Japanese Imperial Regent, from a family of immigrants. 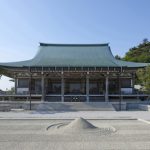 In ancient times, Mt. Maya overlooked the eight counties from the summit, and was named Hashumine, the eight province ridge. The temple was built on that mountain by the order of Emperor Koutoku (596-654) in Naniwa no Miya Palace. He routinely dispatched the Kentoushi ship, taken by the Japanese envoy to visit the Tang Dynasty in China, via the Seto Inland Sea.
The Indian high priest, Houdo Sennin(Hermit) opened this temple in 646. After that, the Japanese teacher, Kobo Daishi, returned from Tang Dynasty China and enshrined the statue of Buddha’s mother, Maya. From that point, the mountain became name of Mt. Maya.
From “Kikuseidai,” an observation square at Mt. Maya, you can see the sparkling stars at night. And during the day, you can see Namba’s palace and Osakajo Castle.

A clean and favorable place was chosen, in each province, to build Kokubunji Temple, a state-supported provincial temple, during the 8th century. Shinano Kokubunnji Temple and Shinano Kokubun-niji Temple, a state-supported provincial nunnery temple, were built in Ueda, along the Chikuma River. This was near the Tosan-do Road, the main road that divided the country, situated along the central mountains of northern Honshu, Tohoku region, in the middle of the 8th century. The Shinano Kokubunji Historic Park and the precincts of this temple have a freshness and cleanness.
The temple distributes hexagonal wooden amulets with the letters ” Sominshorai Shison-no-mon, the gate for the descendants of Sominshorai: the deity who guards against epidemics”, which is related to the faith in Gozu Tenno, the deity of Disease, in India. It overlapped as far back as the Tempyo era (729 – 749), during the Nara period (710 – 794).

This museum exhibits 8 themes about State-supported provincial temples in Ueda and Chisagata, during the mid 8C, Kokubunji and Kokubunniji were built to be certified through the excavation survey results. Those themes are from the era when people emigrated and lived, through the Kokubunji Construction, during the Nara period, until the Heian period (8-12C).
From the corridor of Kokubunniji, the second-oldest coins, Wadokaiho, have been excavated. It also shows how this area may have been the capital of Shinano Nagano region

Rengekai, has been passed down from the Heian period (794 – 1185) to this temple, and was descended from the court music and dance in Kyoto. It retains the characters of ancient religious ceremonies and its faces and costumes are exotic, and its origins are considered dances from various places, such as India, China, the Korean Peninsula, and Asia.
The old mask used for the dance, introduced from Continental China in the Nara period (710 – 794). was burnt down in a fire in 2007. It seemed to have descended from the Mask of Gigaku, a masked drama-dance performance imported to Japan in the Asuka period (550 -710) and disappeared after the Tempyo era (729 – 749) in the Nara period (710 – 794).

The excavation of the pommel of sword with Head Ornaments, provides Yamaguchi with a strong connection to the Yamato Court in 6th century Yamato. Through Suo Kokufu, a provincial office and Suo Kokubunji Temple, a state-supported provincial temple in the 8th century, there is a complex of buildings from the time of its establishment in the Nara period (710 – 794). It is very rare in Japan.
The principal image of this temple is the statue of Yakushi Nyorai, the Buddha of Healing. The Flanking Attendants of the Yakushi are the statue of Gakko Bosatsu, the deity of the Moon, and the statue of Nikko Bosatsu, the deity of the Sun. The statues of the Flanking Attendants were originally symmetric, but these statues are made in the same shape, which is unusual. Those statues are presumed to be an early work in the Heian period (794 – 1185), by the gentle appearances, and the stretched bodies with a high waist. 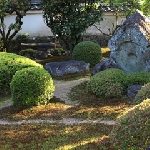 This temple is near the site of the residence of Ki no Tsurayuki (872? – 945): Japanese author, poet and courtier of the Heian period, who served as the 48th Kokushi, provincial governor, of Tosa Kochi. There is a garden of Sugigoke: hair moss, with the slab engraved with Haiku: Japanese poem of seventeen syllables, of Takahama Kyoshi (1874 – 1959): a Japanese haiku poet.
The garden welcomes Ohenrosan – Shikoku Pilgrimage: a multi-site pilgrimage of 88 temples associated with Kobo Daishi Kukai (774 – 835), the founder of the Shingon sect, with calmness all year round.
It is no coincidence that it was chosen as the Province’s best place by the imperial decree of 739 as the place to build Kokubunji, state-supported provincial temple in the 8th century.
Even though it became an abandoned mossy temple in the Medieval Ages, Chosokabe Motochika (1539 – 1599): a feudal lord, and the 21st head of the Chosokabe clan in Tosa Province, rebuilt it in 1558, and its history continued.

As epidemic and famines spread throughout the country, Emperor Shoumu (701 – 756) issued an imperial decree to build Kokubunji, a state-supported provincial temple in each Province in Japan. The location selected for Kokubunji was surrounded by paddy fields and overlooked a magnificent sacred mountain in Bungo Province, Oita.
Bungo Kokubunji has a seven-storied pagoda of about 67 m height and a two-storied Kondo, the main hall of a Buddhist temple that enshrines the principal image. The two buildings were lined up on the precinct, which spanned 300 m from north to south and about 180 m from east to west. The cornerstone of the seven-storied pagoda still remains.
This museum, located on the site of the historic park, introduces excavated Haji pottery and materials.