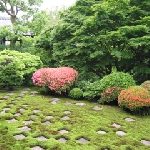 This temple was founded in the Kamakura period (1185 – 1333) by Kujo Michiie (1193 – 1252), a courtier and regent, who named To-Fuku ji from To-daiji Temple in Nara and Ko-Fuku ji in Nara, by taking one character of those temple names. This temple is the Zen temple is the fourth ranked of Kyoto Gozan, the five great Rinzai temples of Kyoto. This Hojo, abbot’s chamber, and garden of Zen Buddhism is unique.
The garden was designed by Shigemori Mirei (1896 – 1975), a modern landscape architect, who incorporated the abstract composition of modern art, based on the dignity of the simplicity and fortitude of the Kamakura period. Mirei studied Japanese painting and the history of Japanese gardens. His garden design is characterized by powerful rock arrangements and a modern allotment of moss. 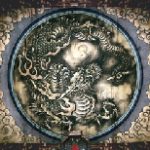 Emperor Hanazono (1297 – 1348) was enthroned at the age 12 and transferred the throne to Emperor Go-Daigo (1288 – 1339), who successfully overthrew the Kamakura shogunate and brought the Imperial House back into power (1333 – 1336), 10 years following Ryoto tetsuritsu, the alternative succession of the imperial throne. Emperor Hanazono had the residence of a court noble, as his Imperial villa. That villa was located in Hanazono Kyoto, where the seasonal flowers blossomed.
This temple began by transforming the villa and by inviting Kanzan Egen (1277 – 1360): a monk of Japanese Rinzai Zen Buddhism and the founder of Myoshinji Temple. Kanzan was recommended by Shuho Myocho (1283 – 1338): a Japanese Rinzai Zen Buddhist monk and the founder of Daitokuji Temple.
Lady Kasuga (1579 – 1643), who was the wet nurse of the 3rd Shogun, Tokugawa Iemitsu and one of the best politicians to negotiate with the Imperial Court for the Tokugawa Shogunate, made her family temple here. Kanou Tanyu (1602 – 1674), a painter patronized by the Togugawa Shogunate family, drew Unryu-zu, the painting of a Dragon in the clouds, on the ceiling of the lecture hall of this temple.
– Lady Kasuga enforced and realized that Tokugawa Masako (Toufukumon’in) (1607 – 1678), who was a daughter of Tokugawa Hidetada, the 2nd Shogun, became Chugu, (second consort of the emperor) of Emperor Go-Mizuno (1596 – 1680).

The official introduction of Buddhism in Japan was in 538, at this temple (then, called Gangouji Temple). An envoy of King Shoumyou from Kudara, the ancient Korean kingdom, travelled through the harbor of Naniwa Osaka and up the Yamato River, to visit Asuka, the ancient capital in Japan. The envoy presented the Sutra and a Statue of Buddha to Emperor Kinmei (509-571). In 594, Empress Suiko (554 – 628) decided, by Imperial decree, to promote Buddhism and to construct temples in several places around Japan.
This temple became the cornerstone for promoting Buddhism in Japan. Here, the Asuka Daibutsu, the Statue of Shakyamuni, with its Archaic Smile and almond-shaped eyes, is faithful to the Sutra of Buddhism, in the China North Wei (386-534) style. 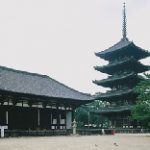 This temple was founded in 730 by Empress Komyo (701 – 760), the consort of Emperor Shoumu. This is the head temple of the Hosso sect of Buddhism, which was brought from India, by Genjo Sanzo (602 – 664), a Chinese monk, the author of “The Great Tang Dynasty Record of the Western Regions,” and the founder of the Hosso sect of Buddhism. The doctrine of the Hosso sect is that unconscious knowledge is at the root of personal existence, deep consciousness is the base, and all consciousness is changeable.
There is the National Treasure five-storied pagoda, which is a thick and grand tower that used to be called “Toin Butsuden-in, the hall in the east” together with Tokon-do, Eastern Golden Hall. Kofukuji Temple used to have three Golden Halls (center/east/west), where many statues of Buddha were enshrined.
Sarusawa Pond, looking up at the tower, reflects on its surface various consciousnesses and thoughts. Like Ninnin Yushiki, the idea that the Surrounding environment and self-consciousness is connected with unconscious knowledge at the root of personal existence. 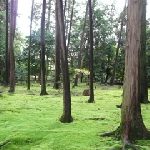 Ganjin (688 – 763), a Chinese monk who helped to propagate Buddhism in Japan, in 754, finally came to Japan during his sixth journey in 753. This temple was opened by Ganjin and contains the grave of Ganjin in the recess of the precincts in the northeast.
The fragrant yellow-white Baxian-hua, in front of the Mausoleum of Ganjin, which came from his hometown of Yoshu, Yang Province, China. It’s flowers bloom in early summer.
The moss garden, which has not changed for 1300 years, is proof of Ganjin’s observation that “the soil is good”, when he arrived at this former residence of Prince Nittabe (died 735), the son of Emperor Tenmu (631 – 686).

The World Heritage Site, Horyuji Temple, is located against the backdrop of the hillock of Yata, which has beautiful green pine trees. It was founded at Ikaruga Palace overlooking the Yamato Plain in about 607 by the Prince Shotoku (574 – 62２), who developed the state, including authoring the Seventeen-Article Constitution, and dispatching envoys to the Sui Dynasty (581 – 619).
The building caught fire and was reconstructed in the Asuka period (550 – 710). It is Saiin Garan, the Western Precinct, which is now the oldest wooden structure group in the world. Yumedono, Hall of Dreams, was built at the site of the Ikaruga Palace in the Nara period (710 – 794) for praying for the Bodahi, the enlightenment of Prince Shotoku. It is now the central wooden structure in the Toin Garan, the Eastern Precinct.
You can see a lot of Buddhist statues from the Asuka period (550 -710) and other arts and crafts, including the Wall painting of Kondo, main hall.
–the Wall painting was painted around the end of the 7th century and is considered to be representative of Asian ancient Buddhist paintings along with the Ajanta Caves in India (BC 1st -2nd century and 5th – 6th century), and the Dunhung Mogao Caves in China (4th – 13th century). 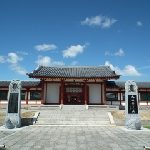 This temple was founded over three generations of Emperor, Emperor Tenmu (631 – 686), Empress Jito (645 – 702), and Emperor Mommu (683 – 707). This temple was the head temple of the Hosso sect of Buddhism, which was brought from India, by Genjo Sanzo (602 – 664). Sanzo was a Chinese monk who travelled to India over 17 year. He wrote “The Great Tang Dynasty Record of the Western Regions”, and founded the Hosso sect of Buddhism.
This temple enshrines the parietal bone of Genjo and the magnificent wall painting of “The Great Tang Dynasty of the Western Regions”, by Hirayama Ikuo (1930 – 2009), a Japanese painter. The work was dedicated at the Genjo Sanzo-in hall. There is the magnificent 75 sq. cm, 248 paneled coffered ceiling.

This shrine was worshipped as a shrine for the protection of the Enryakuji temple Shiga, when Saicho, Dengyou Daishi (767 – 822), the founder of the Buddhist Tendai sect, built the temple at the top of Mr. Hiei.
This shrine became Taisha, a Grand Shrine, to protect people from evil and disasters at Kimon, the unlucky quarter of the northwesterly direction, of the nation’s new capital, Heiankyou, Kyoto. This shrine’s main building in the west was built in 1586 with Hiyoshi Zukuri, a gabled roof with verandas on the sides and has Hiwadabuki, a cypress bark roof.
Although the roof looks like Irimoya Zukuri, a building with gabled – hipped roof, from the front view, the roof is featured in Sugaruhafu style, with long wide front bargeboards, with raised eaves on the back, and the edge of the roof is shorter as if being cut down vertically.

A giant stone structure, with a width of 6.4 m, a height of 5.7 m, and a depth of 7.2 m, is enshrined at Mt. Hoden. It is called Ishino (Stone’s) Hoden. The giant stone structure is considered as floating, in masonite terms, and is called the Ukiishi, floating stone.
According to Harimanokuni fudoki, the topography of Harima Province, this shrine was developed in the 6th and 7th Centuries. Before the construction of the stone palace was completed, the two gods of Izumo Province entered this giant stone and graciously settled the land.
Here, they point out the relationship between this giant stone and the stone structure Masuda Iwafune in Kashihara city, Nara Prefecture. 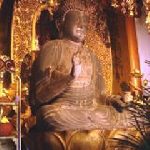 Nabari was an inn during the Nara period (710 – 794). Prince Oama (631 – 686) who became Emperor Tenmu in 673, stayed her during his escape to the east provinces during the Jinshin War in 672. This was a war of succession between Prince Oama and Prince Otomo, who was son of Emperor Tenchi (626 – 671).
Nabari was developed as the manor of Todaiji Temple in Nara in medieval Japan, and the trees from this area are still used for Omizutori, a water-drawing ceremony performed at Todaiji Temple on March 13. This temple is a treasure trove of Buddha statues, including the wooden statue carved from one tree of the Sacred Kannon, the Buddhist Goddess of Mercy, and the statue of the eleven-faced Kannon, the Buddhist Goddess of Mercy.
This Kannon was made using Yosegi zukuri, the technique of assembling carved and treated blocks made from cypress, developed in the latter part of the Heian period (794 – 1185). These forms expressed total peace, like a full moon, and represent the Fujiwara era of Kokufu Bunak-Japan’s original national culture (894 – 1185).
Nabari can be seen from Mt. Akibayama behind the main hall. 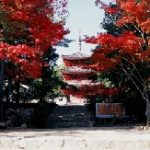 This temple was a Chokuganji Temple, the temple built at the order of the Emperor in the Kamakura period (1185 – 1333). This temple is a complex of buildings with seven major structures in the traditional Zen-style architecture. It has Sanmon (temple gate), Butsu-den (Buddha hall), Hojo, (abbot’s chamber), Kuri (temple kitchen, quarters of a head priest and his family), Zen-do (a meditation hall), Shoro (a bell tower) and Kyo-zo (scripture house).
It is said that Master Painter, Sesshu Toyo (1420 – 1506), a Zen monk and the master of ink painting in Japan, practiced at this temple in his child days. There, he painted a mouse with his tears. Its precincts is splendid, where the elegance from silence and clarification hangs.
The three-storied pagoda was built during the period of the Northern and Southern Courts (1336 – 1392). Dainichi Nyorai, Supreme Buddha of the Cosmos and the central object in Esoteric sects of Buddhism, and the flanking image of the Four Devas, were worshiped to install Shumidan, an altar of a Buddhist image, on the pagoda’s first story. Its ceiling has the painting of Tenyo, a heavenly maiden. Its Sorin was made of bronze.

This temple was built by Emperor Tenji (626 – 671) for his mother, who died at the Battle of Hakusukinoe, during the Paekche restoration war, in 663. This temple has a bell which is said to be the oldest bell casted in Tatara Chikuzen Province, Fukuoka in 681. This temple was the best temple in the western part of Japan, where Kaidanin, the original ordination hall for priests in Japan was established in 754, by Ganjin (688 – 763), a Chinese monk who helped to propagate Buddhism in Japan, during the Tempyo era (729 – 749) of the Nara period (710 – 794).
Sugawara no Michizane (845 – 903), a scholar, poet, Udaijin, the Junior Minister of Stage, and revered as the god of learning, wrote a poem, Fushutumon. The poem mentioned the will to behave himself, which was sworn on this temple bell. Hozo, the treasure house of this temple, exhibits 16 precious Buddha statues from the Heian period (794 – 1185) and Kamakura period (1185 – 1333). 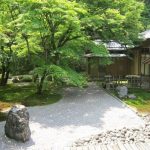 This is the same temple as the Tofukuji temple School in Kyoto and is connected with Tenmangu Shrine, which was founded by Tetsugyu Enshin (1254 – 1326), a monk of Rinzai Zen.
Enshin came from Kanke, the Kan family, which had produced scholars from generation to generation. They were to be a Monjo Hakase, Doctorate of Literature at Daigakuryo, the Imperial university. He studied Ritsuryo, the Japanese ancient law system, including Sugawara no Michizane (845 – 903), a scholar, poet, Udaijin, the Junior Master of Stage, and revered as the god of learning.
This temple has the front garden, Futsuko Sekitei of Karesansui, a dry landscape garden that represents the ocean with white sand. The Japanese character meaning “light” is made by arranged stones, letting visitors feel the light in their heart. It has also the back garden, Itsutekikai no niwa, which represents land with moss and the ocean with white sand. And only maple trees are planted at both gardens, whose leaves fall off the trees during winter.