Ano no Sato Village is located in a valley along the Niugawa River, which pours into the Yoshinogawa River. Emperor Go-Daigo (1288 – 1339), successfully overthrew the Kamakura shogunate and brought the Imperial House back into power (1333 – 1336). Later, the Ashikaga shogunate split the imperial family into two opposing factions between the Ashikaga backed Northern Court, situated in Kyoto, and the Southern Court, based in Yoshino Nara, led by Go-Daigo and his later successors.
Emperor Daigo stopped here when escaping to Mt. Yoshino in 1336, after being pushed from Kyoto, by Ashikaga Takauji (1305 – 1358), the founder of the Ashikaga Shogunate. Emperor Go-Murakami (1328 – 1368) established the Imperial Palace of the Southern Court at the private residence here, in 1348, after leaving Mt. Yoshino.
The private residence of the Imperial Palace is left as a historic site, and this museum displays treasures of the Southern Court, items related to Emperor Go-Daigo, and valuable historical materials such as, Ekirei, certificates of qualification to use official horses by the imperial court, and Tenmokudai, a stand for tea bowls.

In the middle of the Nara period (710 – 794), Kunikyo Shiga was newly built as the capital, leaving the Heijyoukyo Nara. By starting the construction of the Shikagaki Palace as the Imperial villa, Kunikyo became virtually the capital of Japan in 745. The palace currently is under the rice paddies about 17.3 ha which was designated as a national historic site.
However, the site of large scale buildings of Chodo, a place where the Emperor works and meets with the vassals, was discovered by excavation research. It shows some of the thought that Emperor Shoumu (701 – 756) had about the palace construction. There is an exhibition room that explains the contents of the excavation research.

This museum is adjacent to Osakajo Castle, and introduces the Osaka of the Ancient Period, Medieval Ages and Early Modern Period, Modern and Contemporary Period. And you can see the Naniwa no Miya, Naniwa Palace ruins excavated and preserved underground.
There was a huge Kawachi Bay in the northeast of the Uemachi Upland, where the museum is built. It was converted to sedimentary plains during the Jomon period (16,000 years ago – 3,000 years ago), the Yayoi period (the 4th BC – 3rd century) and the Tumulus period (the 3rd– 7th century), where continental and peninsular cultures were introduced.
You can realize the conversion of ancient geography and history here. 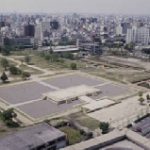 The Naniwa no Miya, Naniwa Palace, which is mentioned in Nihon Shoki, the oldest chronicles of Japan, was located south of Osakajo Castle and northeast of the ancient Uemachi Plateau. There are the remains of earlier and later settlements. Later, the palace of Emperor Shoumu (701 – 756) was built with the Chinese-style corner stone and roofing tiles in 744.
The earlier palace of Emperor Kotoku (594 – 654), built 80 years before Emperor Shomu’s, used pillars placed directly into the earth and had a roof of either shingles or cypress bark, in the ancient Japanese style.
The imperial zone of the Later palace was 185 m east to west, 200 m north to south. There were Octagon storied buildings, in the Chinese-style, from side to side.

Mt. Ibuki (Height 1377m) is a Mountain looking up from the plains of the northern part of Lake Biwa. This driveway leads close to the summit, and the panoramic view is spectacular. It is a mountain that has been closely associated with people’s lives since ancient times, including as a source of medicinal herbs.
It is described as a mountain of gods, in the Kojiki, the records of Japanese Ancient Matters and in Nihonshoki, the Chronicles of Japan. Yamatotakeru no mikoto, a Japanese legendary prince of the Yamato Dynasty, and the son of Emperor Keiko, fought a white wild boar, which was the embodiment of Araburu kami, – a miraculous spirit of this mountain.
– Later, Yamatotakeru became exhausted at Kameyama, in the Suzuka Pass Mie, on the way home to Yamato Province, Nara. When he died, he made a poem, Yamato ha Kunino Mahorobo Tanazuku Aogaki – Yamato is the best province in Japan. Yamato is surrounded by mountains, like green hedges that overhang in layers. Yamatotakeru, healed the wound by the white wild boar, with the clear water at the foot of this mountain. 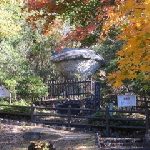 This park faces an artificial lake made of the Oi Dam, to block the Kiso River. The surface of the lake is colored by the changing of the four seasons. The red Enakyo Ohashi Bridge has strangely shaped rock and oddly shaped stones lining both sides. There is the Nationally designated natural treasure, Kasaiiwa Rock, in Oicho, Ena. The top is like giant mushroom, with a circumference of about 10 m, and is biotite of granite.
It is said that the placenta was buried at the summit of Mt. Enasan, at the time of the birth of Amaterasu Oomikami: Sun Goddess and the Japanese Emperors are considered to be direct descendants of Amaterasu. Mt. Enasan overlaps with the ancient meaning of mountain – “the God of mountain is female”, was the thought in ancient Japan.

Yame has been an alluvial fan, supplying the blessing of nature, since ancient times, where the Yabe River and the Hoshino River flowing from the Oita Prefectural border, meet. At the present, Yame is one of Kyushu’s leading tea producing areas, and its Gyokuro, refined green tea production is second only to Kyoto.
This Tea Field is 70ha in size which is like a green carpet as far as you can see. It is easy to spend time here in summer and winter, and there is no record of large natural disasters. This alluvial fan scented like Gyokuro was the land of the king in ancient northern Kyushu Islan

The summit of Mt. Kagamiyama (Height 284m) has a good view to look over Nijinomatsubara, a 360-year-old pine forest in Karatsu Saga, with a width of 400 – 700m and a length of about 4km. It was the property of the 1st lord of Karatsu Domain, Terasawa Hirotaka (1563 – 1633), who created Karatsu Bay, and as far as Ikinoshima Island.
This mountain is a famous spot for cherry and azaleas blossoms, and, in early April, a flower tunnel comes up along both sides of the 4km mountain trail. There is a stone statue of a princess, who saw off and continued shaking off her stall to Otomono Sadehiko, the general in the Japanese Imperial court, and the son of Otomono Kanamura, high ranking ministry in the court in the 5th – 6th century.
Sadehiko was dispatched to the Korean Peninsula, in the time of the Invasion of Mimana, by Siila (BC57 – 935), which was in the southern area of the Korean Peninsula, and the site of Nihon-fu, the governing institution of Japan, in ancient times.

It is said that Kikuchijyo Castle was built in the hilly area of the Kikuchi River basin by the guidance of aristocrats exiled from Paekche. Japan was defeated by Siila and Tang allied forces at the Battle of Hakusukinoe, the Paekche restoration war, in 663 on the Korean Peninsula in the latter half of the 7th century. Military bases were established in various places in West Japan, in preparation for the invasion of the Japanese archipelago.
The Kikuchi River basin is a rich area that benefits from Mt. Asosan. It is an important area of the Yamato Imperial Court in Japan. This museum introduces the culture from Paekche and historical tension at that time through the reconstructed historical sites.