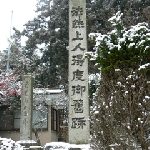 The principal image of this temple is Yakushi Nyorai, the Buddha of Healing. It is enshrined at Konpon Chu-do, the largest central hall, which was made by Saicho, Dengyou Daishi (767 – 822), the founder of the Buddhist Tendai sect.
Fumetsu no hoto, the eternal dharma flame, still lights the principal image at the Konpon Chu-do. Here, the rape seed oil has been poured for 1,200 years and has been preserved. There is Honen-do, the temple dedicated Honen Shonin (1133 – 1212), a priest and the founder of the Jodo sect – the first independent sect of Japanese Pure Land Buddhism.
It is about a 5 minute-walk from the Enryakuji Kaian, lodging, by going down a steep slope, after going up and down to Monju-ro, Manjusri Pavilion, a training hall of Zen meditation, from the Konpon Chu-do. Honen-do is on the site of Kotokuin Temple, where Honen had Tokudo, entering Buddhist priesthood, under Koen Ajari (died 1169), a monk of the Tendai sect.
Later, Honen became the founder of Kamakura New Buddhism, new schools of Japanese Buddhism founded during the Kamakura period. The site of Kotokuin Temple is the memorial site of Honen and Kamakura New Buddhism. 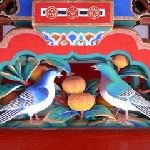 Iwashimizu Hachimangu Shrine enshrines Hachiman Okami in the second Imperial family’s and nation’s mausoleum, following Ise Shrine. The god’s messenger of Hachiman Okami is a dove, a symbol of peace.
The National Treasure Honden, Main Hall has Hiwadabuki, a cypress bark roof constructed by Tokugawa Iemitsu, the third shogun (1604 – 1651). A National Treasure, this shrine was founded in 859 at the unlucky direction of Kyoto, to ward off evil spirits from the Kyoto capital.
Thomas Edison(1847-1931) used to collect bamboo to make filaments that would give his electric light bulbs long life. Ultimately, he used the bamboo from around Mt. Otokoyama of this shrine and made a bulb that lasted over 1,000 hours. 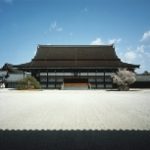 This Palace was rebuilt on Satodairi, a temporary imperial palace built outside of the imperial palace, after the fire in the Kamakura period (1185 – 1333). This palace conveys the ancient shape of the Imperial palace, which was not allowed for the reconstruction, by the Kamakura Shogunate, in the samurai days.
The existing building, reconstructed in 1855, followed the medieval style of the Heian period (794 – 1185). Shishin-den, which points to Polaris in the Palace, is Seide, the Hall for State Ceremonies. In the front of Shishi-den, a Cherry tree and Tachibana, a mandarin orange tree, are planted where the left division of Imperial Palace Guard, and the right division of Imperial Palace Guard, used to stand in the ceremonies. 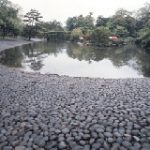 This palace was constructed for the Emperor Emeritus Go-Mizuno (1596 – 1680), abdicated Emperor in 1627. The garden was created with rich beauty and refined simplicity by Kobori Enshu (1579 – 1647): a feudal lord, a master of the tea ceremony, an architect and garden designer.
Its elegant circuit style garden contains two large ponds, the North Pond and the South Pond, as well as two tea house pavilions. A garden path leads around the North Pond and crosses a canal connecting the North and South Ponds by an earthen bridge, and leads around the South Pond.
The shore of the South Pond is famous for its graceful pebbled beach created from stones nearly identical in size and shape. In spring, cherry blossoms, wisteria trellis and azaleas can be enjoyed. In autumn, the garden is ablaze with autumn leaves. This garden exhibits brilliant beauty, with bounded stability, such as stonework. Visiting the palace requires prior registration.

This temple is located at the foot of Mt. Tsukinowa in Higashiyama, Kyoto, and has an Imperial family grave, which held the funerals from Emperor Go-Yozei (1571 – 1617) to Emperor Komei (1831 – 1866) in the early modern times and enshrines Tsukinowaryo, an Imperial Mausoleum.
This temple was founded by Gazirin Daishi Shunjo (1166 – 1227), a dharma-seeking priest to the Son Dynasty, and a founder of the Shingo Ritsu sect, who came from Higo Province Kumamoto.
The main complex of buildings was built in the architecture style of the Song Dynasty (960 – 1279), in 1226. This temple emphasized the Buddhist precepts, and became the place where priests practiced the Shingo Ritsu sect (Hokyo-Ritsu), which is with Yonshu kengaku, learning the four sects of Ritsu, Esoterism, Zen and Pure Land.
Clear water came out from the spring in the construction of the main complex of buildings. As a result, the name of this temple means “The temple that springs out clear water”.

This shrine was founded in 1889 and enshrines Emperor Go-Daigo (1288 – 1339), who successfully overthrew the Kamakura shogunate and brought the Imperial House back into power (1333 – 1336). The Ashikaga shogunate split the imperial family into two opposing factions: the Ashikaga backed Northern Court, situated in Kyoto, and the Southern Court, based in Yoshino Nara, led by Go-Daigo and his later successors.
This shrine is on a 8.9ha site and has a view of Mt. Kongouzan (1125m) and Mt. Katsuragisan (959m) in the west and Mt. Takamisan (1235m) in the east. This shrine’s main building faces the direction of Kyoto, from where Emperor Go-Daigo eagerly awaited the return of the Emperor. This shrine building made of all-cypress, represents modern shrine architecture.
The main building faces the north was built in Nagare Zukuri, an asymmetric, gabled roof, with one side of the roof gabled roof and the other side, non-gabled. This worship hall is built in Irimoya Zukuri, building with gabled – hipped roof. This Shinmon, shrine gate, and other buildings use Kiritsuma Zukuri, a gabled roof. This shrine’s architecture is one of the most elegant, splendid buildings.

This temple was built beside Lake Biwa during the 7th Century. The spring at this temple was used for the ritual bathing of newborns of Emperors and Empresses. The principal image of Kanoundo is Nyoirin Kanoun, the Bodhisattva of Compassion. This temple used to prohibit women from making a pilgrimage. But Kanoundo was an exception. Nyoirin Kanoun, always a woman’s ally, has collected much reverence.
This temple’s Kangakuin was founded as a place of study, during the Kamakura period (1185 – 1333). In 1600, it was rebuilt as Kyakuden, reception hall that hosted guests such as the Imperial family. The wall paintings for Ichinoma and Ninoma are drawn in the intelligent and gentle style, by Kanou Mitsunobu (1565 – 1608), who was the eldest sons of the genius painter, Kanou Eitoku (1543 – 1590): one of the most influential Japanese painters, and a head of the Kanou school of Japanese painting.
Ichinoma, the meeting room, was drawn with the immortal mountain world in Taoism in Konpekiga, slide screen painting with gold-foil-pressed paper. Ninonoma, the waiting room, was drawn with 24 screens of colored paintings of flowers and birds. 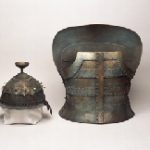 There are many huge tumuli represented by Nintoku Tenoryo Kofun – the Imperial Mausoleum of Emperor Nintoku (the 4th and 5th centuries) in the The Mozu Tumuli Clusters, registered as a World Heritage Site in Sakai City. This museum permanently exhibits “The Era of Giant Tumulus” and “The Era of Free City Sakai,” which flourished in foreign trade.
This museum introduces the history of Sakai City at the four corners, which are “Tumulus – Nintoku Tenoryo Kofun”, “Free City Sakai”, “Sakai Industrial Culture” and “Prayer and Festivals”. In addition, special exhibitions (once a year) and temporary exhibitions (several times a year) are also held. 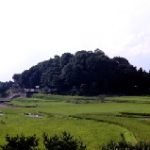 This mausoleum is a long-sided tomb, which is built with three long steps from both the east and the west. It was thought to have had two lateral stone chambers inside. It is also presumed that at one of them, Prince Takeda was buried who passed away earlier, by the will of Empress Suiko (554 – 628).
This mausoleum is located along the oldest national highway, Takenouchi Kaido Road which connects to Naniwa harbor, which was also built by the order of the Empress. It is thought that this mausoleum’s construction was also related to the historical enterprising of the Empress. 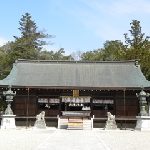 This shrine is located on Awaji Island Hyogo, which was called Onokoro Island, in Japanese mythology.This shrine is the oldest shrine that enshrines Izanagi, a male deity who fathered Japan and Izanami, a female deity who mothered Japan, in the mythology of Kuni-umi (the birth of the land of Japan) and Kami-umi (the birth of the God of Japan). They are the main deities in the first enshrinement in age of the God Description at the Kojiki, the records of Japanese Ancient Matters and Nihonshoki, the Chronicles of Japan.
The site of this shrine has been transmitted as the site of Kakurenomiya, the Hidden God Palace of Izanagi, and the place where the sun’s orbit crosses, from Kumano Wakayama to Hyuga Takachiho Miyazaki on the winter solstice, from Ise Miyazaki to Tsushima Nagasaki on the vernal and the autumnal equinox, and from Shinano Suwa Nagano to Izumo Sshimane on the summer solstice.

“The Harmonic stream of Agricultural Industrialization in the Yayoi period (the 4th BC – 3rd century)” -This shrine enshrines Atsuta-no-Ookami, as represented by the sacred sword of Kusanagi-no-tsurugi, one of the Imperial symbols. This shrine is at the Atsuta plateau, in front of the fertile Owari Plain, and has preserved the sacred forest. This shrine has been worshiped as a god of peace in state security and for bumper crops in agriculture for over 1,900 years.
Approximately 6,000 dedications of the Jingu Treasure Hall convey the history of the 1,900 year history of faith at this shrine. Oda Nobunaga (1534 – 1582), the legendary warlord and the military dictator, prayed for the victory over the Battle of Okehazama in 1560. The 3,000 soldiers of Nobunaga beat the 25,000 soldiers of the Imagawa Clan with a surprise attack. After the triumph, Nobunaga dedicated the walls of this shrine as his appreciation.
The folding screen of the flower and bird, by Wanabe Kiyoshi (1778 – 1861), a painter of Yamato-e, Classical Japanese decorative paintings, conveys the religious belief of Owari Domaine in Tokugawa Gosanke, three privileged Tokugawa branch families, in the Edo period (1603 – 1868).