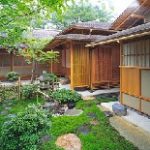 The Uji River traditional fishing method Ukai, fishing with cormorants, appears in Nihon-shoki, the oldest chronicles of Japan in the 8th century. Saicho, Dengyou Daishi (767 – 822), the founder of the Buddhist Tendai Sect, brought back tea by Kentoshisen, a ship of an envoy to the Tang Dynasty (618 – 907), in the 9th century. Emperor Saga (786 -842), who knew the benefits of tea, deeply devoted himself to Buddhism and avoided the slaughter of fishing.
Uji-byodoin Temple was built in the latter part of the 11th century. At that time, Mappo-shiso, the belief of Buddhism’s destined downfall had spread. Gradually, the fishermen of the Uji River transferred from fishing to making tea, – “the history of Pure Land Buddhism and Tea.”
You can easily enjoy a tea ceremony service at this tea house, which is located across from Uji-byodoin Temple. 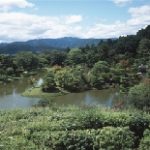 In the middle of the 17th century, the Emperor Emeritus Go-Mizuno (1596 – 1680), the abdicated Emperor built this Imperial Villa. This is a Japanese garden characterized by its use of the natural scenery around it.
The estate incorporates three different plateaus named Upper Villa, Middle Villa, and Lower Villa, each with its own building and garden, as well as paddy fields. A graveled path lined with pine trees crosses over the paddy fields and connects the three villas.
From the Rin’untei Pavilion situated at the highest level in the Upper Villa, visitors can enjoy the dramatic panorama of the pond called Yokuryūchi, which was formed by damming water flowing down the mountain, with the view of the whole city of Kyoto below and the western mountains on the far side. The villa shows the achievement of court culture and aesthetics. The scene is descended from the scene of the 8th century anthology of Japanese poetry, Manyoshu, too.
Visiting the villa requires prior registration. 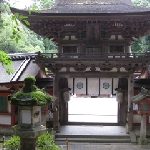 Ise Jingu and Isogami Jingu shrine are the only shrine sites before the Nara period in the 8th century. This shrine enshrines the deity of Futunomitama no Tsurugi, a divine sword, as the main enshrined deity which was worshiped by the Mononobe clan, a powerful military clan by the 6th century.
There used to be no shrine building in this shrine and it was said that sacred treasures were buried at the sacred place behind the worship hall. Futunomitama no Tsurugi and Magatama, the ancient Japanese ornamental stone for sanctuary ritual in the 4th century were excavated in 1874.
This shrine has the high affinity at the ritual system with Ise Jingu and it is thought that this shrine had the role of the armory in the Yamato Imperial Court.

This shrine had been in charge of the diversion of water in the east district of Yamato province since the ancient time of Emperor Suijin. The diversion of agricultural water has been managed under the name of Mikumari no Kami, the deities of the watershed in the Yayoi and Kofun period, BC 4 – the 6 centuries.
Udanomikumari shrine shimosha (lower) is located along a main road from Yamato Nara to Ise Mie, at the foot of Mt. Inasayama. At the top of this mountain, there is a monument inscribed with a poem of Emperor Jinmu’s expedition to the east and a grave of Fumino memaro, the Shogun of Emperor Tenmu in the 7th century.
Fumino had protected the road leading to the capital of the Emperor, Asuka Nara, in the midslope of this mountain. 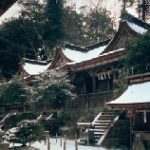 Yoshino mikumari shrine originated at Kannabi, a holy mountain, Mt. Aonegamine(858m), in the northern part of Omine Mountain Range and is the watershed of Yamato Province. This is one of 4 Mikumari Tasha shrine, which managed the diversion of agricultural water under the name of Mikumari no Kami, the deities of the watershed.
Toyotomi Hideyoshi (1537 – 1598), the powerful feudal lord that unified Japan, and the Imperial Regent, made a pilgrimage to this shrine, and prayed for the conception. He was said to have been awarded by Toyotomi Hideyori (1593 – 1615). Hideyori rebuilt the shrine in 1604.
This shrine possesses an undisclosed goddess statue, which is said to represent the characteristics of the Kamakura sculpture with its Gyokugan, eyes made of crystal. It might have been influenced with the culture along the Kinokawa River that connected with Nara Busshi, the sculptor of Buddhist Statues in Nara.

The shrine is dedicated to the Emperor Tenji (626-672), who moved the capital to Otsu Kyo in 667. Time management began in Japan at Otsu Kyo. Time was measured by the leakage of the water clock, which long existed in Egypt, Mesopotamia, and, China, and was informed by the ringing of the bell.
This clock and treasure museum exhibits ancient eastern and western timepieces, including the Japanese clock, along with the offerings of the past. The beginning of civilization is time management.

The Kawachi Ichinomiya, Kawachi Osaka is the most important provincial Hiraoka Shrine. It is located along the main road that leads to Nara, beyond the pass of the Ikoyama Mountains, and is at the foot of Mt. Kamitsudake(315m) Higashi Osaka. It was formerly the Kasuga shrine.
The main building of the four vermillion buildings is Hiraoka Zukuri. A roof extends over the main entrance, covering a veranda, which faces to the west. This shrine worships Amenokoyane no mikoto, a male deity, the god that performed Norito, incantations, as the enshrined deity.
The god performed Norito and held out the divine mirror in Amanoiwato, the Cave of heaven, in which Amaterasu Oomikami: Sun Goddess and the Japanese Emperors are considered to be direct descendants of Amaterasu, hid herself.
The god is Kasuga Gongen, the manifestation of Buddha in the form of Kami, which is the ancestor god of Sekkanke, the family that produced the Regent and the Chief Adviser to the Emperor, the Fujiwara clan, in the 9th – 11th centuries.
This shrine transferred the ancestor god, enshrined at Kasuga Taisha shrine in Nara, which was built in the transfer of the capital to Heijyoukyo Nara, in the 8th century. 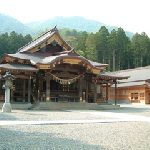 Mt. Yahikoyama which borders Niigata city and Nagaoka city, has the full view of the Japan Sea and Sado Island. The mountain trail runs along side Akihiko Shrine. Yahiko shrine is the Echigo Ichinomiya, Niigata’s most important provincial shrine, and it has been worshiped since ancient times.
Amenokaguya no mikoto, the son of Nigihayahi no Mikoto is enshrined here. Amenokaguya no mikoto, is the God which conveyed the basics of salt-making techniques, fishing, and rice cultivation, by the order from Emperor Jinmu.
At this treasure hall, the relics of revered warriors such as Minamoto no Yoshiie (1039 – 1106), the head of Minamoto clan, and Uesugi Kenshin (1530 – 1578), the feudal lord of Echigo Province, are exhibited.

The Echu Tonami Plain, depicted in Todaijigoshouenezu, Todaiji temple in Nara, was a rich area to support the Capital in Nara era (710 -794) with tribute and labor. There used to be a manor office of Todaiji temple in the early Heian period (794 – 1185). In the center of the Takase Archaeological Park, there are three buildings ruins with pillars roots of 20-30cm in diameter.
At around Takase Shrine, Jomon period stoneware specialties were offered to the Meiji Emperor were also excavated. Those show the existence of excellent culture since ancient times.

It is said that Takasejinja shrine was also the Echuu Ichinomiya, Echuu Toyama most important provincial shrine.This museum exhibits Imperial Treasures, excellent stone products in the the Jomon period (16,000 years ago – 3,000 years ago), which were excavated from the area nearby Takasejinja shrine and offered to Emperor Meiji (1852 – 1912).
The Echuu Tonami Plain had supported the capital with tribute and labor since the Nara period (710 – 794), which was described at Todaiji Goshoen Ezu, the painting of the manor of Toudai Temple in Nara.
There are three building traces, in the center of Takase Iseki Park, the archaeological park, which leave pillar roots with a diameter of 20 to 30 cm. It is the site of the manor management office of Todaiji Temple at the beginning of Heian period (794 – 1185). 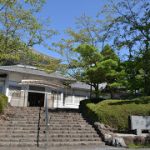 “Ancient Japanese style: Self-sufficient, with Appreciation” – Jingu Museum introduces Treasures for the Jingu Shikinen Sengu, the transfer of a deity to a new building after a prescribed number years, at the Ise Jingu Shrine. An Agriculture Museum introduces the traditional ceremony in which people offer each year’s harvests and gifts of the Sea to the god who preserves a Self-sufficient lifestyle.
A large amount of natural science-related materials, such as industrial materials exhibited at domestic trade fairs in the Meiji period (1868 – 1912), as well as shark stuffing and wax works of plant models, are possessed and exhibited.