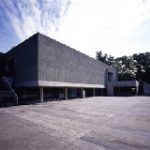 This museum was established in 1959 when the collection of Matsukata Kojiro (1866 – 1950), a Japanese businessman and Western art collector, was returned to Japan. The Matsukata collection had become the property of France in World War II, but was donated back.
This building was designed by the master of modern architecture, Le Corbusier (1887 – 1965), a Swiss-French architect. His proposal was for an infinitely growing museum. Corbusier’s architecture emphasizes floors, columns, and stairs. It considers the reasonableness in breaking from tradition.

This museum will hold seasonal exhibitions that introduce the charm of Kamakura and special exhibitions that probe one theme, aiming to become a new cultural center for Kamakura, in centering on the history of Tsurugaoka Hachimangu.

This museum located at the grounds of Tsurugaoka Hachimangu is the successor to the former Museum of Modern Art, Kamakura Annex, which is the first public museum of modern art in Japan, and was designed by Sakakura Junzo (1901 – 1969), a Japanese architect in 1951.

Sakakura studied in France under the master Le Corbuisier (1887 – 1965) a Swiss-French architect and one of the pioneers of modern architecture. He designed the Japan Pavilion on the slopes of Trocadero at the 1937 Paris Exposition. He received the Grand Prix of the Exposition in Architecture. He was the first Japanese architect to be recognized internationally.

This Museum is adjacent to the Ikaho Green Ranch along the Altenade – the road of art that runs from Shibukawa City downtown to Ikaho Onsen, hot spring. This museum possesses about 1,000 items including abstract expressionism and pop art by the masters from the latter half of the 20th century and artists active in the 21st century art scene.The collections are painting, sculpture, photography, video, and installation etc.
This museum also has the collection of Hara Rokuro (1842 – 1933), a businessman who contributed to the industrialization of Japan. He was active during the Meiji Restoration, the event that sectored practical imperial rule of the Empire of Japan in 1868 under Emperor Meiji. The collection of oriental antique art knows the true value.        In the industrialization of the 19th century, the mission of art was to preserve the inspiration for something innocent that occurred. 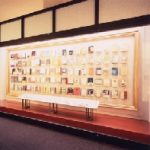 This museum opened in 1999 on the rich, natural shores of Yamanaka Lake. This museum has the collection of handwritten manuscripts, creation-research notes, letters, paintings, photographic materials, books, research, translations, magazines, movies, drama materials, etc. From these collections, it was discovered that Mishima had many teenage writing works. At this museum, you can learn about the dramatic life of Mishima and the source of the wonderfulness of Mishima Literature.
– Mishima wrote novels with the theme of beauty, the sea, and death. He also described the fear of the sea as a change in admiration, and he portrayed a gorgeous emptiness in Japan after World War II.