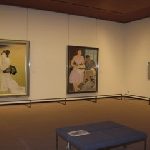 The museum is located in the Biwako Cultural Park, which is a hillock dotted with the Iron Works that supported the Yamato Court, to the east and southeast of the Seta River, in the 7th to 8th centuries. It possesses modern Japanese paintings and works related to Shiga Prefecture. Ogura Yuki (1895 – 2000) is a female Japanese painter, who drew female images in vibrant colors until the age of 105.
This museum has 60 of her works, the largest collection of her works in Japan. Her long journey is introduced in the permanent exhibition room. 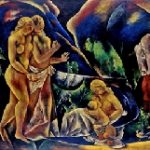 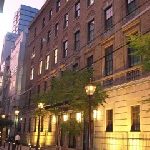 Osaka was lagoon city, with over 1,600 bridges during the Taisho period (1912 – 1926). Ancient civil engineering techniques from Chinese Continents had been handed down to accommodate the Japanese climate. The name of this street came from the Sankyubashi Bridge over the Nagaborigawa River, although it has disappeared. The Sankyubashisuji Street, illuminated by restored gas lights, remains a route from Osaka City Central Public Hall to Nagahori-dori street and conveys the Taisho Roman.
– Taisho Roman is the trend of thought and cultural events in the Taisho period, which was influenced by aestheticism and Dadaism from Europe in the 19th century. This is in contrast to Taisho Modernism, which is based on Market Value. 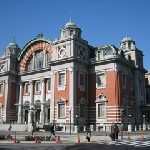 This public hall is in NaKanoshima, Kita-ku, Osaka City, which has a red brick wall, a bronze dome roof and Neo-Renaissance architecture. It is a beautiful building on the river bank of the Tosabori River.
The construction was completed in 1918 (Taisho 7) by the huge donation of Iwamoto Einosuke (1877 – 1916), a stockbroker in Osaka. Iwamoto was known as “a chivalrous speculator,” and died before its completion. This public hall is the place of dispatch of Osaka’s culture, where concerts, operas and lectures have been held. It is still popular as a rental hall for many people.
– This public hall is located in Nakanoshima, which had flourished with Kurayashiki, a warehouse of the Domain that was used as a rice exchange for many domains in Japan during the Edo period (1603 – 1868). Kurayashiki was shut down in the Meiji Restoration, an event that sectored practical imperial rule of the Empire of Japan in 1868 under Emperor Meiji. Nakanoshima needed redevelopment. The redevelopment needed chivalry and nobles.

This museum consists of an art department and a history department. It introduces art works and historical items, related to Ashiya. The Art department possesses mainly works by Koide Narashige (1887 – 1931), a Japanese painter, and Yoshihara Jiro (1905 – 1972), a Japanese abstract painter. Koide’s restored atelier, cafe, and beautiful lawn garden are popular. Events related to the exhibition are frequently held.
– Ashiya camera club was established in 1930, which introduced Surrealist and Avant Garde works. Photography arrived to Japan in 1860, in Yokohama Kanagawa. The culture of modernism spread with the exurban development in the Hanshin district (between Osaka and Kobe) during 1900 – 1930. 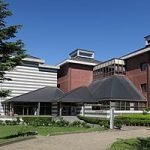 This museum opened in the Komaba Park in Nagasaki Prefecture in 1983, after the donation of more than 400 works of art collected by Yui Ichiji (1909 – 1992): a Japanese businessman and art publisher from Saku City, for 50 years, to Saku City. It possesses modern Japanese paintings, Western paintings, sculptures, crafts, and calligraphy works. The collection of the diverse works of contemporary artists are more than 3,000 items.
A porcelain panel painting, “Saku Sanka, the Hymn of Saku City – Ikeda Masuo (1934 – 1997): a Japanese painter, printmaker, illustrator and sculptor”. The panel painting is installed in front of the entrance, and is always attracting visitors. 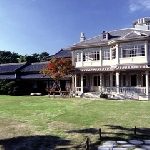 Kuwana, is located at the mouth of “Sansen – The three big rivers”: the Kiso River, the, Nagaragawa River and the Ibigawa River. Kuwana was run by a self-governing organization, similar to Sakai, Osaka, in the Muromachi Period (1366 – 1573).
Kuwana was a post town linked to Miyajuku Station, at Atsuta Jingu shrine, in the Edo period (1603 – 1868). Moroto Seiroku (1888 -1969), the 2nd head of the Moroto family, thrived in the wholesale business of rice, and other business in the Meiji period (1868 – 1912). He commissioned Josiah Condor to design a Western-style residence in the wooden Renaissance style.
The residence is open to the public with the appearance at the time of its construction, which consists of a group of buildings and a garden on a vast site. 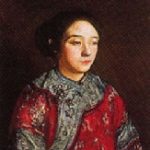 This museum is located in the Hiroshima City Central Park with lush greenery, which possesses modern European paintings centered around the French Impressionist and Japanese oil paintings since the Meiji period (1868 – 1912).
Kishida Ryusei (1891 – 1929), was influenced by Vincent van Gogh (1853 – 1890), a Dutch post-impressionist painter, and Paul Cezanne (1893 – 1906), a French Post-Impressionism painter, who resonated with the ideals of humanitarianism in the Shirakaba school, a literary society that emphasized humanitarianism, and deeply expressed “the inner beauty”.
He looked at the problems of the modern Japanese painting that drastically pursued the art of Western Industrialized countries.

This museum has representatives of Western European art from the Barbizon school, Impressionism to the present day, and a group of masterpieces that cannot be overlooked in the history of Japanese modern art after the Meiji period (1868 – 1912). Little Girl Dancing by Kishida Ryusei (1891 – 1929) was a Portrait of Kishida’s eldest daughter, 9 years old. Kishida was born in Ginza Tokyo, joined Hakuba-kai, a group of Japanese western painters who held exhibitions of their works, and studied under Kuroda Seiki (1866 – 1924), a Japanese painter and a leader of the Western-style painting movement. Kishida got acquainted with Yanagi Muneyoshi (1889 -1961), a Japanese art critic, philosopher and founder of the Mingei (a Japanese folk art movement in Japan), and Mushanokoji Saneatsu (1883 – 1976), a Japanese novelist, poet and philosopher. He was also influenced by Albrecht Durer (1471 – 1528), a German painter in the renaissance period, and changed to his painting style rigorous and realistic. In his later years, he was enthusiastic about collecting oriental antique art and Kabuki, a classical Japanese dance-drama. In “Little Girl Dancing,” you can see the influence of Ukiyoe, Japanese woodblock prints, the Edo period (1603 – 1868).

Kan Kikuchi (1888 – 1948), a Japanese author and the founder of the monthly magazine, Bungeishunju, had the anecdote of reading through most of the 20,000 books in Takamatsu’s library when he was a student. He laid the foundation for the rise of the present literary world. The museum opened in 1992 to present and introduce his long-term achievements and honors. You can trace Kikuchi’s life through the reproduction of his study room, including photographs of his life, handwritten manuscripts, numerous relics and actual materials. Successive winners of the Akutagawa Prize and the Naoki Prize
– Japanese popular literary award, which he established in 1935, are also introduced and displayed to show the flow of Japanese literature. Kikuchi founded the monthly magazine, Bungeishunju for young writers. He set an expensive clock as the main prize for the Akutagawa Prize, so that the young writers could bring it to a pawn shop, if they needed to.