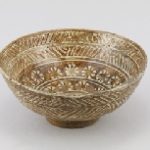 Nomura Tokushichi (1878 – 1945) founded Nomura Securities Co., Ltd. and was the Master of the tea ceremony named Tokuan. In addition to being a Sukisha, a tea ceremony master, and a refined person, Nomura was also a painter, calligrapher, an extraordinarily talented landscape designer, and he was proficient in Noh, a form of theater involving music, dance and drama, developed together with Kyogen in the 14th century.
The museum is near Nanzenji Temple, where a line of villas created an elegant atmosphere for a long time. This museum has 1,500 items including 7 important cultural properties, such as Dankan Satakehon Sanjyuroku Kasen Ki no Tomonori – “Fragmentary Leaves of a Writing” by Ki no Tomonori (850 – 904), a courtier noble and Japanese Poet, and the Satake version of the illustrated hand scroll of thirty-six immortal poets.
This museum introduces the collection sequentially at special exhibitions in spring and autumn. Also, you can also enjoy Jonamagashi, high-grade Japanese fresh confections, and Ryurei Chaseki, a tea serving method using a tea chest, while watching the collection. 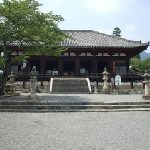 This temple, founded by Marokono-oh, half-brother of the Prince Shotoku (574 – 622), was built as the temple of the powerful Katsuragi clan. This temple is located at the foot of Mt. Futakami (517m odake and 474m medake). The atmosphere feels like the Pure land of Buddhism. The treasures of this temple are a golden statue of Amida Buddha, Amitabha, and the Taima Mandala.
The Mandala was woven in only one night by Chujyouhime, a young lady of noble birth during the Nara period (710 – 794). The Mandala shows the spectacle of the Pure Land of Buddhism. The national treasure East and West three-story pagodas were built in the Nara period.
The Nakanobo garden, which adds to the view of the East pagoda, and the haze on the Taima village give you the feeling of the Pure Land. 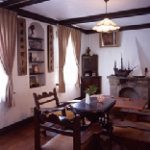 This museum is located in the precincts of Kumano Hayatama Taisha shrine, which belongs to Kumano-sanzan, the Three Main Kumano Shrines, in World Heritage Sites, Sacred Sites and Pilgrimage Routes in the Kii Mountain Range. The residence of Sato Haruo (1892 – 1964), a Japanese novelist and poet, in Bunkyo-ku, Tokyo, was relocated here, and this museum was opened in 1989.
The drawing room, where many literary-men sat, was restored, and the associated items with Haruo can be seen in front of you. Paintings, books, raw manuscripts, valuable first edition books, etc. are exhibited in the exhibition corner.
The charm, brightness and coolness in Haruo’s poetry and calligraphy, came from growing up here before leaving the city, is understood well here.

In 754, Ganjin (688 – 763), a Chinese monk who helped propagate Buddhism in Japan, performed Kaidan at Todaiji Temple Daibutu- den (the Great Buddha Hall), at the first time in Japan.
-Kaidan is the ceremony that officially names a priest to the monks.
It is also said that this temple was founded by the leading disciple of Ganjin in 806.
The temple is situated on a hill in Arida City, along the Kii Channel and the Arida River, where overseas cultures arrived, since the ancient times.
Next generation Buddhist sculptures, by Unkei (1150 – 1223), a Japanese sculptor of the Kei school, during the Kamakura period (1185 – 1333), are lined up at this temple, guarding the main temple and Tahoto, the two-story pagoda with a square base, pent roof and round top. 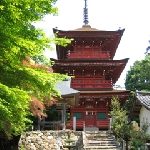 This shrine was built in 1024 as an associated shrine of Iwashimizu Hachiman Shrine. Excavated mirrors and cornerstones and roofing tiles from the Hakuho era, during Emperor Tenmu and Empress Jito’s reign in the late of the 7th century, indicate a deep connection to the Imperial Court since ancient times.
Toyotomi Hideyoshi (1537 – 1598), the powerful feudal lord who unified Japan, and the Imperial Regent, built the shrine in 1585. It was destroyed by fire in the war, during the period of the Northern and Southern Courts (1336 – 1392).
There is a bell tower behind the shrine building, containing the bronze bell collected by Hideyoshi for cannon casting. That guides the history of Shinbutsu-shugo, the syncretism of Shintoism and Buddhism with the three-storied pagoda rebuilt during the Edo period in the 17th- 19th centuries. 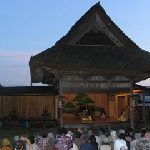 Sado Island is the point of contact between the warm current and the cold current of the Sea of Japan, where Sado Province was established before the 8th century. People and cultures had been transported from Kyushu Island, Izumo Province, Sanin region facing the Sea of Japan in the western part of Honshu Island, and the Noto Peninsula. And the unique culture in Sado Island had been developed, in which nobles, samurai, and common people were unified.
Zeami Motokiyo (1363 – 1443), aesthetician, actor and playwright of Noh, was exiled to Sado Island from Kyoto in the Muromachi Period (1366 – 1573), too. Many Noh theater stages were built in the villages from the richness of the rice-producing region in the Shogun demesne, in the Edo period (1603 – 1868). Noh is a form of theater involving music, dance and drama, which developed together with Kyogen in the 14th century. Kyogen, is the classical comic theater developed from Sarugaku, which is a form of popular pantomime theatre, with drum dancing in Japan during the 11th -14th centuries.
Sarugaku was performed in the villages for praying for a rich rice-producing harvest. Here is the scenery of the origin of Noh and Kyogen, developed from Sarugaku.

In the Heian period (794 – 1185), Minamoto no Yoshinaka (1154 – 1184), Lord Kiso, a general and the cousin of Minamoto no Yoritomo (1147 – 1199), the 1st shogun of the Kamakura Shogunate, defeated the big army of the Heike (Taira) clan, and proceeded to the capital, Kyoto. Although Yoshinaka was appointed the title of Asahi, sunrising Shogun, he was defeated by the Kamakura Army of Minamoto no Yoritomo in the stratagem of Cloistered Emperor Go-Shirakawa (1127 – 1192). He had a heroic death in his short life.
The departed heir of Yoshinaka which was preserved by Tomoe Gozen (1157 – 1247), a female samurai to serve Minamoto no Yoshinaka, and the second generation of Shigure. The Drizzle cherry, which Yoshinaka planted himself, beside the Kanondo (the temple deciated to Kannon, the Buddhist Goddess of Mercy), remains at this temple.
In front of the Main temple, Karesansui, a dry landscape garden, and Kanuntei, a Garden of Appreciating Clouds, were designed by Shigemori Mirei (1896 – 1975), a modern landscape architect. The garden is overlooking the mountains and clouds of Mt. Ontakesan (3067m). 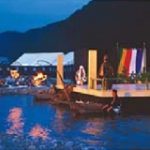 In the summer evening, Takiginoh, noh theater performed by a fire, has a 1,300 year history. It is held on a special stage of the riverbed, and shows the world of subtle and profound beauty.
The dance and sound penetrate deeply into Mt. Kinkazan overlooking the stage. The area around Mt. Kinkazan used to be the sea in ancient times. The rocks were raised by crustal movement over time, bringing out the mountain’s steep slopes. Later, an impregnable Castle was built on the summit.
Takiginoh was originally performed for the castle dedication, but is also dedicated to Mt. Kinkazan. 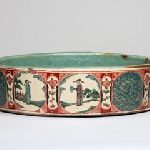 This museum introduces the rich history of Kuwana, with authenticity. Kuwana had been a key transportation hub, since ancient times. It connected the Kinai region, provinces surrounding Kyoto and Nara, with the Tosan-do Road, an ancient division of the country and the main road running through it, situated along the central mountains of northern Honshu, Tohoku region.
In Kuwana, timber from Kiso Province and goods from the Shogun demesne in Mino and Hida Province were gathered and supplied to Edo, during the Edo period (1603 – 1868). Kuwana flourished as a relay station to Edo.
Takahashi Haran was a painter in the first half of the 19th century. A flower basket woven with bamboo is often used in waka, Noh, and Kyogen, the classical comic theater developed from Sarugaku, a form of popular pantomime, with drum dancing, during the 11th -14th centuries. It is an important item that conveys a remnant of old Japan.
This collection shows Kuwana’s aesthetic sense to know authenticity, which does not forget traditional culture, even in modern times.

Tendai and Esoteric Buddhism, and Shugendo: Japanese mountain ascetic practices, had spread in the mountain villages of Buzen and Bungo Provinces until around 1870, in Haibutsu Kishaku (abolish Buddhism), the event triggered by the official policy of separation of Shinto and Buddhism, which caused great damage to Buddhism in Japan after 1868.
The sacred place was Mt. Kubotesan which is a cone-shaped mountain (Height 782m). Andesite lava are scattered everywhere in the mountains, and that shows that the mountain used to be an active volcano.
The ancient Sue ware was excavated and the history of the mountain of fait seems to have begun since the Tumulus period (the 3rd– 7th century). This museum located the foot of the mountain possesses and exhibits materials related to Shugendo of Mt. Kubotesan. 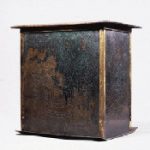 During the Heian period (794 – 1185), monks who practiced at Mt. Kubotesan, part of the Tsukushi Mountains in Fukuoka Prefecture, were afraid of Mappo-no-yo, the destined downfall of Buddhism. They buried sutras on bronze plates in a cave in the mountain. These line-engraved 8 volumes of Lotus Sutra, and Hannya Shingyo, the Heart of Great Perfect Wisdom Sutra, were intended to be preserved for the future.
This culture property consists of the 33 sheets of bronze plate and a bronze box which was a line-engraved Amida: the principal image of the Buddha in Pure Land triad: Amida attended by two Bosatsus, Buddhas.
There is Taho-nyorai, the Buddha of Many Treasure. To one side, Bishamonten, the Guardian god of Buddhism, and to the other side, Fudo Myoo, the God of Fire. This is a rare example of the complete form of bronze plates and bronze box.

This museum reopened after renovation on September 23, 2020. The history, archeology, folklore, and art of Nobeoka City from prehistoric times to modern times are introduced at the Permanent Exhibition, and three full-scale reproductions of a pit dwelling, an old folk house, and an apartment complex are displayed at the Reproduction Exhibition of the surroundings. Themed and special exhibitions centering on domestic and foreign artworks are also held.
The previous Nobeoka Naito Memorial Hall was built at the site of the Palace of the Naito family in Shiroyama Park. This park is also the site of Nobeokajo Castle, which possesses a Noh mask named Tenkaichi, “the best on earth” and Daimyodougu, Japanese feudal lords’ belongings.
The Naito family were Hereditary feudal lords. They came to this region from the Iwakidaira Domaine in Fukushima. They were forced to relocate here by a daimyo, a feudal lord in a different domain, under the Tokugawa Shogunate’s rule.
The Naito family supported the Tokugawa shogunate. They had governed Nobeoka until the Meiji period (1868 – 1912). Nobeoka Tenkaichi Firewood Takiginoh, noh theater performed at night by a fire, is held in October against the backdrop of the “One Thousand Murdered Soldiers” stone wall at Ninomaru’s second bailey, the Plaza at the site of Nobeokajo Castle.