Sugawara no Michizane (845 – 903), a scholar, poet, and Udaijin, a Junior minister in Kyushu’s Dazaifu government office. This shrine was built in 947 in the oracle of Michizane. The current shrine building is Ishinoma Zukuri.
It’s Main Hall and worship Hall are integrated and connected by a low building called Ishinoma, the stone-room, which became the base model of Gongen Zukuri, a style of Shinto architecture in which the main hall and worship hall share one roof, and are connected via an intermediate passageway. Awe-inspriing to Sugawara no Michizane became the Tenjin worship which was called Sennen Tenjisama, a thousand years to worship Tenjin, from the Imperial family to merchants.
This treasure hall that possesses the Kitano Tenjin engi emaki, Illustrated Legends of Kitano Tenjin shrine dedicated to Sugawara no Michizane and other treasures, tells the history. The Kitano Tenjin engi emaki, drew people and landscapes with a dynamic composition and polite expression, on the vertically-connected writing papers, which were normally connected horizontally. 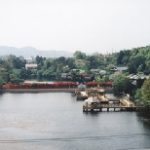 Nagaokakyo was located at the place where the Katsura, Uji, and Yodo rivers join together, and was the capital of Japan for 10 years after Heijyokyo Nara. Nagaokakyo was connected to Naniwa Palace Osaka through the Yodo river, which was reconstructed by Emperor Tenmu (631 – 686). The scale was comparable to Heiankyo Kyoto.
Sugawara no Michizane (845 – 903), a scholar, poet, Udaijin, the Junior Master of Stage, enjoyed poetry and Kangen, Japanese court music with flutes and strings, here along with Ariwara no Narihira (825 – 880), a Japanese courtier and poet. He came back here before the demotion, and left excellent poems and the remnants.
Later, this shrine was built at the site of his remains. The approach is a middle dike that divides the Hachijo-gaike pond for irrigation, ordered by the lord, Prince (Hachijo) Toshihito, the grandson of Emperor Ogimachi (1517 – 1593) and the founder of the Katsuranomiya family. Refinement is aligned over the times.

Kongo Zaogogen, the most important deity in Shugendo, a Japanese mountain ascetic practice, is a unique Buddha of Japan that did not originate in India or China.
Kongo Zaogogen is the united Buddha of Shaka-nyorai, Buddha, Senju Kannon, the Buddhist Goddess of Mercy, with 1,000 arms, and Miroku Bosatsu, the Buddha of the Future.
This was made by En no Gyojya (Born 634), a Japanese ascetic and the founder of Shugendo, after his 1,000-day Circumambulation of Mt. Kinpusen – from Mt. Yoshino to Mt. Sanjogatake of Omine Mountain Range. Zao-do, a temple dedicated to Kongo Zaogogen, is the main temple, which enshrines the three statues of Kongo Zaogogen, with about 7 m height.
The Zao-do is 34m tall and 36m in circumference and has Hiwadabuki, a cypress bark roof, which is the largest wooden building in the world. 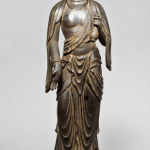 This museum was opened in 1895 as the Imperial Nara Museum. Nara Buddhist Sculpture Hall (formerly Main Building) was originally built and designed by court architect Katayama Tokuma (1854 – 1917). It is also the venue for the Annual Exhibition of Shoso-in, the treasure house of the Imperial Household Agency, which includes Treasures (in autumn) and introduces valuable cultural assets centering on Buddhist art.
There is the statue of the eleven-faced Kannon, the Buddhist Goddess of Mercy, with a pitiful, boy-like expression. It was made by Zen Ei (1197 – 1258), a sculptor of Buddhist images, in 1221. It is believed that it was made as Honjibutsu, the original Buddhist divinity of a Shinto’s god from Kasugataisha Shrine.
– In Japan, historically, the Shinto’s gods and Buddhist divinity had been inextricably linked to worship. It is called “Shinbutsu-shugo”, – the syncretism of Shintoism and Buddhism. 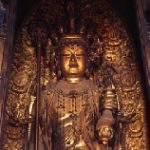 This temple is the Kannon Reijo, sacred place of Kannno, the Buddhist Goddess of Mercy, that represents Japan. It was founded in the first half of the 8th century and this land (Hatsuse) has been sacred since then.
In 727, Tokudo Saint enshrined the statue of the Eleven-faced Kannnon, is the principal image of this temple, with the spirit tree that flowed from the province of Omi, Takashima.
The present principal image is the largest wooden Buddha in Japan, with a height of more than 10m. It was made in 1538 by Unshu, the great sculptor of Buddhist statutes. The tranquility of the principal image and landscape of Hatsuse synchronize well. Hatsuse was described in the Manyoshu, the 8th century anthology of Japanese poetry.
The imperial princess of Emperor Tenmu (631 – 686) did the purification here for Ise Saio, the God serving in Ise Jingu. 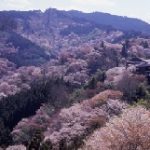 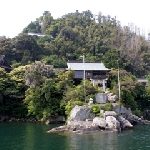 Chikubujima surrounded by a 2km sheer cliff, floats about 6km far from the lake shore of Nagahama city, is the island where Gods reside. This shrine enshrines the Goddess of Biwa Lake, Azaihime no mikoto, was worshipped here to ensure the safety of water traffic on the lake. This shrine building is directly connected with Kannnon-do Hall of Hogonji temple, by a corridor called Huna-roka.
Hogonji temple is dedicated to Sarasvati, the god of wealth, music eloquence and water. It also has the remnants of Fushimi Castle, Kyoto. It has Fusumae, a picture painted on a sliding paper door, and a picture painted on a ceiling, by Kanou Mitsunobu (1565 – 1608), the eldest son of Kanou Eitoku, who was one of the most influential Japanese painters, and a head of Kanou school of Japanese painting. Non-public.
There is the worship hall after going down through the stone steps from the shrine building, where Taira no tsunemasa, warrior of the Taira clan, and biwa, the lute musician, appeared in the Tale of the Heike, Narrative poetry of the struggle between the Heike (Taira) clan and the Minamoto clan for control of Japan at the end of the 12th century.

Nanao is the place that Hasegawa Tohaku (1539 – 1610), a Japanese painter and founder of the Hasegawa school, was born, and where the province office, and Kokubunji, state-supported provincial temple in the 8th century, were established in the ancient times.
Also, the Hatakeyama clan culture of Kyoto and Kitamae-bune, cargo ships that sailed the Japan Sea during the Edo period (1603-1868), visited in the medieval age and the early modern times.
Nanao also has the Okuma Kabuto Festival of Kuma Kabutojinja Shrine, which enshrines the deity from the Korean Peninsula.
This painting is estimated to have been produced by Tohaku at the age of 28 to 30. The Buddha in the painting, is said to have appeared in the religious rites of praying for rain by Kobo Daishi Kukai (774 – 835), the founder of the Shingon sect.
Tohaku painted the kid like girl with the golden dragon, instead of the snake, at the head, a sword with Sankosho: metallic mallet used in esoteric Buddhist rituals in the right hand, and Nyoi-Hoju, a Wish-fulfilling Jewel, in the left hand, as the Buddha appeared by the rites. 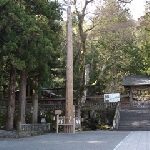 Suwa Taisha Shrine is one of the oldest shrines in Japan. It consists of 4 shrines. Kamisha, south of Lake Suwa, enshrine the gods. Shimosha, north of Lake Suwa enshrine the goddesses. Every seven years, since the Heian period (794-1192), the Onbashira Festival is held, where huge pillars of fir trees are rolled in to reconstruct the shrine.
The pillar is said to be the object of the gods of Mishaguji, a god in snake form with stones and trees as objects representative of a divine spirit that was worshipped in eastern Japan. It seems that the god has been syncretized with the lake dragon in Suwa. 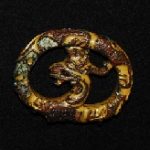 The beginning of this shrine was described at Tenjin emaki, Illustrated Legends of this shrine dedicated to Sugawara no Michizane (845 – 903), who was a scholar, poet, Udaijin, the Junior Master of Stage, and revered as the god of learning. When Michizane died in Dazaifu, Fukuoka in 903 (Yenki 3), a light glow appeared on the sea, and Zuiun, a glory cloud covered Mt. Sakatariyama.
The following year, a shrine in Matsugasaki, Hofu was built to enshrine the spirit of Michizane, and the mountain was eventually called Tenjin mountain. This mountain was indicated to be a sacred place since ancient time by the excavation of a sword with Head Ornaments that have a decorated sword handle with a ring head, and many other ancient items remain here.

Sentomyo, is the ceremony of a thousand candles, which are lit in the Shinjiike pond, a heart-shaped pond, which is one of the autumn festivals of the shrine and Jinkoshiki, the God-Procession Festival. This ceremony started to dedicate the soul of Sugawara no Michizane (845 – 903), who was a scholar, poet, Udaijin, the Junior master of Stage, and revered as the god of learning, in the Heian period (794 – 1185).
This ceremony was organized by Ooe Masafusa (1041 – 1111), who was Dai no gon no sochi, a chief secretary of the government of Kyushu, in the Heian period (794 – 1185), 200 years after Michizane’s death. This ceremony had been handed down since that time, at this shrine.
The three bridges of the Shinjiike pond represent the past, present, and future aspects of Buddhism. It is said that crossing those bridges cleans up the evil thoughts in these three aspects and purify the mind and body. 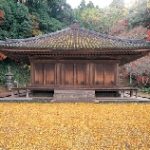 This temple is one of the few architectures in the style of the Heian period (794 – 1185), located outside the Kinki region. Shinbutsu-shugo, the syncretism of Shintoism and Buddhism, began at Usajingu Shrine, Oita and spread to Kunisaki Peninsula. Kumano Magaibutsu – Buddha statues in a natural rock wall, were made at temples of mountain worship.
On other hand, this temple was “Sato no Tera – a temple built at the manor in the village”. This temple shows the richness of Heian Buddhist art, along with the 9 statues of Buddha enshrined at the adjacent temple, Maki Odo.
Those Buddha statues convey the remnant of Motoyama Hachikaji, one of 8 head temples in Kunisaki Rokugo-Manzan, a group of Tendai sect temples in Kunisaki Peninsula.

Shinbutsu-shugo, the syncretism of Shintoism and Buddhism, began at Usajingu Shrine, Oita and spread to Kunisaki Peninsula in the Heian period (794 – 1185). Kumano Magaibutsu – Buddha statues in a natural rock wall, was made at temples of mountain worship.
On other hand, this temple was “Sato no Tera – a temple built at the manor in the village”. This temple was a temple of Motoyama Hachikaji, one of 8 head temples in Kunisaki Rokugo-Manzan, a group of Tendai sect temples in Kunisaki Peninsula. It was the largest temple in Rokugo Manzan.
There are the 9 statues of Buddha statues stored in the Treasure house, which convey the remnant of Motoyama Hachikaji, and the richness of Heian Buddhist art.