This museum introduces cultural properties associated with the Tokugawa Family of the Kishu Wakayama Domain. It also has World Heritage, Sacred Sites and Pilgrimage Routes, Mt. Koya and Kumano, where nature and gods overlap, by Nachinomiya Mandalazu, the pilgrimage guide to Kumano Nachinomiya shrine, and others.
This museum possesses Gantoshishiokimono, which is the excellent masterpiece of prized ornaments called Kokawasaku, made in Kokawa Town Wakayama, in the Edo period (1603 – 1868).
This ornament shows the Ancient Chinese narrative, which was Shishi, the divine beast that kicked their kids down to the valley, to increase their chance of survival. Many civilizations from abroad, like copper-lead alloy castings, came through the Kinokawa River since ancient times. Kokawa Town is located along the river.
The foundry industry such as Buddhist altar fittings had flourished in Kokawa Town since the Middle Ages. 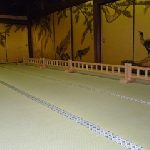 This temple was founded in 745 by Gyoki (668 – 749), a Japanese Buddhist priest and organizer of public works projects, like irrigation, and an ancient temple of the Shingon sect of Mt. Koyasan. It is also known as “Okyo’s Temple”. Maruyama Okyo (1733 – 1795) was a painter and the founder of the Maruyama school of painting, was born in Tanba Province, Kyoto and received financial support from the chief priest of this temple.
Okyo returned to this temple with his disciples, after becoming a popular artist in Kyoto. He left the Fusuma-e, a picture painted on a sliding paper door, in about 13 rooms. Wall paintings of Kyakuden, a reception hall, follow a well-calculated layout.
This is revealed in the composition of the meditation space, where a three-dimensional Mandala, a geometric configuration of symbols used as a spiritual guidance tool in Buddhism in Japan.

This shrine is located in Jike Suzu Ishikawa of the northernmost tip of the Noto Peninsula. It is wrapped in a natural monument Chinjunomori, the sacred grove of the village shrine and is revered as the guardian deity to Kimon, the unlucky quarter of the northeasterly direction in the Japan Sea.
This shrine possesses five wooden seated statues of Japanese male gods. Those statues have different expressions on their faces, with full court dress of traditional fashion in the real beauty style. Minamoto no Yoshitsune (1159 – 1189) the famous warrior, one of the direct descendants of the Minamoto clan, prayed for the safe crossing the sea of his company to Mutsu Province, in the northeast direction.
This shrine possesses Semiore no fue, a sacred flute, which Minamoto no Yoshitsune dedicated, and a short sword of Mamorigatana, a sword for protection, which Musashibo Benkei (1155 – 1189), a Japanese famous warrior monk who served Minamoto no Yoshitsune, dedicated. Those treasures are National designated cultural property and the proof of historical facts.

The three-storied pagoda at Bessho Onsen in Ueda City is the only Hakkakuto, octagonal pagoda, currently existing in Japan, an unparalleled pagoda made entirely of traditional Zen-style architecture.
There are five details of the Zen style. Ogitaruki, is the fan rafters radially under the surface of the eaves. Sohan, is the horizontal setting between a pillar and a foundation stone. Kashira-nuki, is the head rail, and the wood connected horizontally through the top of the pillars. Kibana is the decorative carving at the end of the timber.
And Dainichi Nyorai, the Supreme Buddha of the Cosmos and the central object in Esoteric sects of Buddhism, is enshrined at the octagonal Buddhist altar, on the inside, which is rare in Zen temples.

The name of Azumino City is derived from the marine clans. The Azumi clan was based around Shikanoushima Island in Fukuoka, northern Kyushu, and moved here in ancient times. Hodakajinja shrine in Azumino City enshrines Hotakaminomikoto, the Ancestor god of the Azumi clan and its rear shrine is located at Kamikochi, the foot of Hotakadake(3,190m), the Northern Alps.
In the northeastern region of Nagano City where the Saigawa River joins the Chikuma River, Dotaku, Bronze bells were excavated, which indicate the ancient connection with the Izumo, Shimane and the northern Kyushu areas. 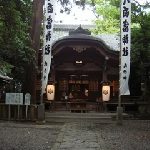 Takeshima Island, a 620 m granitic island, is connected to the land by the Takeshima-bashi, the bridge of Enmusubi, a match-maker. The vegetation of trees in this island is different from the opposite shore, with over 200 species of plants.
There is this shrine in the center of this island which transferred the separated spirit from Chikubushima Island, Shiga, by Fujiwara no Shunzei (1114 – 1204), a noted Japanese poet and aristocrat. Chikubushima Island is at the northern end of Lake Biwa and is the island Gods resided.
Fujiwara no Shunzei was the authority of Japanese Waka poetry and the compiler of Senzai Wakashu, an imperial anthology of Japanese Waka poetry in 1187, at the behest of the Retire Emperor Go-Shirakawa (1127 – 1192). This shrine is counted as one of the seven biggest Sarasvati temples in Japan.
Sarasvati is the god of wealth, music eloquence and water. This shrine worships Ichikishimahimemikoto, one of Three Goddesses of Munakata, the Water Goddess in Japanese mythology.
—This is the historical praying style of Shinbutsu-shugo, the syncretism of Shintoism and Buddhism, in Japan. 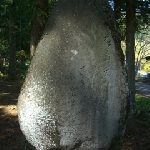 The To family was part of the Chiba clan, a descendant of Kanmu Heishi, The Taira clan originated from the Emperor Kanmu (735 – 806) and was a powerful clan in Shimousa Province.
The To family was based at Tonosho, with an estate in Shimousa Province. After the Jokyu Disturbance in 1221, the fight between the retired Emperor and the Kamakura shogunate, the To family moved and dominated here. At that time, they transferred Myoken Bosatsu, the deification of the North Star from Shimousa Province and funded Myoken-gu, sacred to Myoken. That was the beginning of this shrine.
The To family was the family of Kokin denju, the initiation about interpretation of Kokin Waka shu, Imperial anthology in the 10th century, which was taken into confidence by Minamoto no Sanetomo, the 3rd shogun of Kamakura shogunate.
To Tsunenori, the warrior, the descendants of Fujiwara Teika (1162 – 1241) the Japanese famous poet, the greatest master of the waka, Japanese poem, gave a lecture to Ino Sogi (1421 – 1502), a linked verse poet and Zen monk, at this shrine in 1471. The monument is engraved with Renga, a linked verse poem, remains at this shrine. 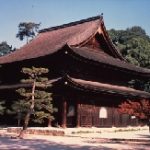 The statue of the principal image Yakushi Nyorai, the Buddha of Healing in the Kondo, the main hall of a Buddhist temple, is in the style of Buddhist sculptor Jocho (died 1057), which is a traditional Japanese-style from the Heian period (794 – 1185).
The Mandala of the Two Realms, Diamond Realm Mandala, and Matrix Realm Mandala were donated by the feudal lord of the Hiroshima Domain, Fukushima Masanori (1561 – 1624), who was a retainer of Toyotomi Hideyoshi (1537 – 1598): the powerful feudal lord and Imperial Regent who unified Japan, after the Battle of Sekigahara in 1600.
Those donated mandalas were produced during the middle of the Muromachi Period (1366 – 1573). The halo of Dainichi Nyorai, Supreme Buddha of the Cosmos and the central object in Esoteric sects of Buddhism, was painted with the same color in the Nara period (710 – 794) and used Ungen-Saishiki, an art technique in which thin bands with distinct colors are placed next to each other in order to give the impression of shading.
This is similar to Bokashi, a Japanese painting method that uses tones that shade into one another, without sharp outlines.

Kobo Daishi Kukai (774 – 835), the founder of the Shingon sect, was born in Sanuki Province, and at the age of 30, he traveled on an envoy ship to the Tang Dynasty (618 – 907). There, he studied not only Shingon Esoteric Buddhism, but also civil engineering. After returning to Japan, he contributed to the construction of Manoike Pond in Tado, which was the largest irrigation pond in Japan.
This museum introduces Kukai’s achievements throughout the year. This museum possesses the folding screen drawing of Takamatujo Castle Town, which is one of 8 folding screens. Takamatsujo Castle was a Sea Castle and an early modern castle in the early part of the Edo period (1603 – 1868). The scenery of the castle town, with details, like people drawing water from the well, is depicted clearly and gorgeously.

The temple was built by Kobo Daishi Kukai (774 – 835), the founder of the Shingon sect, in 813, on the land donated by Kukai’s father, Saekino Atai Tagimi. Kukai copied the Shoryuji (Qinglongsi) Temple in Choan (Xian city) from China’s Tang Dynasty (618 – 907). This was where Kukai’s master, Keika (746-805), the seventh founder of the Shingon sect of Buddhism, served as chief priest.
The Treasure Hall holds 20,000 items, including the important cultural properties, including the Statue of Jizo Bossatsu, a guardian deity of travelers and children, the Kichijoin Standing Statue, and other scriptures, sacred books and ancient documents.
Those treasures are the testimony of Kukai, who brought East Asian and Esoteric Buddhism back to Japan.

Mishima Shrine was founded in 774, when the Uwakai sea was close to this shrine.
At the time, the domineering Fujiwara clan in the Imperial Court and natural disasters had continued after Emperor Konin (709 –782) was enthroned.
This shrine possesses seven statutes of Japanese gods in the late Kamakura period in the 13th -14th centuries have a rich expression caved of one tree. The statues and a Hanging Buddha image plate convey the greatness and true richness of the Uwakai Sea, connected with Kuroshio, the Japan Current, which continues since ancient times. 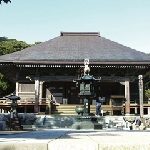 This temple stands on Cape Ashizuri. The cape was thought to be the site of the east gate leading to Mount Potalaka in the seas south of India, the mythical dwelling of Kannon: the Buddhist Goddess of Mercy. This temple was established by Kobo Daishi Kukai (774 – 835): the founder of the Shingon sect, in 822, when Emperor Saga (786 – 842) gave Kukai an Imperial scroll of “Fudaraku Tomon – the east gate leading to Mount Potalaka” written by the Emperor himself.
This temple had been worshiped by successive Imperial families. A family of the Minamoto clan, the head clan of the samurai, adored this temple and built Tahoto, a two-story pagoda with a square base, pent roof and a round top. Izumi Shikibu (Born 876) was a Japanese female poet and a femme fatale with numerous lovers.
She pilgrimaged to this temple during the Shikoku Pilgrimage, a multi-site pilgrimage of 88 temples associated with Kobo Daishi Kukai (774 – 835), the founder of the Shingon sect. She buried her black hair, as a prayer to cut off her worldly passions.