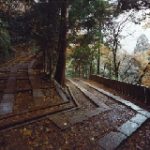 This temple is located in the northern part of Kyoto, which enshrines Sonten, the Holy Trinity of Bishamonten, the Guardian god of Buddhism, Senju Kannon, the Buddhist Goddess of Mercy with a 1000 arms, and Goho Maoson, the king of the conquerors of evil. Shugendo, Japanese mountain ascetic practices, is thriving in this temple, which enshrines the Master of martial arts, Kiichi Hogen. Kiichi Hogen gave the Art of Warfare to Minamoto no Yoshitsune (1159 – 1189) the famous warrior and one of the direct descendant of Minamoto clan.
This temple was also a model of Kitayama-ji, the temple in the Tale of Genji, in the 11th century, a Japanese literature of unique depiction of the lifestyles of the high courtiers. At Kitayama-ji temple, Hikaru Genji, a protagonist of the Tale of Genji, a superbly handsome man and a genius who lived as an imperial officer, met Lady Murasaki no ue, a main character of the Tale of Genji, and the ideal woman of Hikaru Genji.
The front Approach of Ninety-nine Prayers at this temple was described as ”something which is near but also far”, in Makura no soshi, the Pilllow Book, a book of observations and musings recorded in 1002, by Sei Shonagon (966 – 1017), a Japanese author, poet and a court lady who served the Empress Teishi (977 – 1001). This approach may be a preparation for you to encounter wonder. 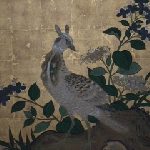 The Shogoin was founded by Zoyo Sojo (1032 – 1116), a monk of the Tendai sect, and Gojiso, a priest who prays for the guarding of the emperor. Zoyo inherited the flow of Chisho Daishi Enchin (814 – 891), the 5th head of the Buddhist Tendai sect, at Onjoji (Miidera) Temple. Zoyo was Sendatsu, a guide, and leader of pilgrimages, for visitors of Shirakawajoko, the Retired Emperor Shirakawa (1053 – 1129), to Kumano, Nara. He supervised all the nationwide mountain ascetic trainees at this temple.
There is Jukeizu, the painting of tragopan, in Ninoma, the reception room, of this temple, which was painted by Kanou Masunobu (1625 – 1694), a Japanese painter of the Kanou school, and the founder of the Surugadai Kanou school. Masunobu studied calligraphy from Shokado Shojo (1584 – 1639), a Buddhist priest attached to Iwashimizu Hachimangu shrine, and became an adopted child of Kanou Kouyu, Kanou Tanyu (1602 – 1674), one of the foremost Japanese painters, a leader of Kanou school, who was the grandson of Kanou Eitoku.
He also learned the latest painting methods of the Ming dynasty (1368 – 1644), “reverse perspective” from Ingen Ryuki Zenji (1592 – 1673), a poet, calligrapher and monk who founded the Obaku sect of Zen in Japan. Therefore, the tragopan drawn by Masunobu approaches you like it is moving.

This shrine began in 656, when Gozu Tenno, the deity of Disease in Mt. Gyuto of the Silla dynasty was transferred to Yasaka villages Kyoto by the mission of Goryeo. The Gion Festival in Yasaka shrine, one of Japan’s three greatest festivals.
It began since that Gion god, Gozu Tenno was worshipped with 66 pikes, erected in Shinsen-en, the garden of Heian-kyo, in the ancient capital in Kyoto, and Mikoshi, a portable shrine was paraded through the capital, praying for the prevention of plagues, after the plagues expanded in various areas in Japan.
A Festival float is mounted with a decorative halberd, which is drawn by Machishu, townspeople, and decorated with the tapestry of the western regions of China and the Gobelin tapestry.
Those let us imagine the journey of Gozu Tenno, a guardian deity of Gionshoja, Gion forest in India, to Japan. 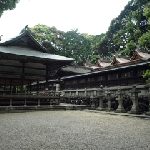 Ikoma Mountains were formed from the upheaval of the Osaka Ikoma fault 1.2 million years ago. The river from the mountains carried gravel to make the alluvial fan in the Kawachi bay, which existed in ancient times in Osaka city. Mt. Ikoma had been worshiped as Kanabi, a holy mountain.
This shrine enshrines the deity of Mt. Ikoma and it had been revered as the God of fire since ancient times. This shrine was described in Nihon Sokoku Fudoki, description of Japanese regional climate, culture, and others in 458, and dedicated Hikiriki, the tool to make fire, to Daijo-sai, a festival to celebrate the succession of an emperor. The forest of this shrine is awe-inspiring.

This shrine is located in a place with a good view, close to the Nachinoootaki, Nachi cascade. According to this shrine’s legend, Emperor Jinmu came from the Kumano-nada Sea, the sea off the coast of Kumano, and landed on the coast of Nachi.
The Emperor entered Yamato, the central domain of ancient Japan, safely with the guidance of Yatagarasu, a Japanese mythological big crow and a sacred symbol of the sun god under the protection of the Nachinoootaki.
In fact, the history of the native people enshrining Nachinoootaki as a god has also been transmitted. Inevitable causality and accidental chance made history cross at the landscape, preserving the memories from ancient times. 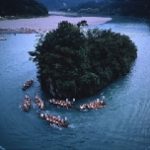 This shrine is one of the three Kumano Sanzan shrines that had been worshiped since the Middle Ages, from the Emperor Emeritus to the common people. This shrine enshrines Izanagi, a male deity who fathered Japan and Izanami, a female deity who mothered Japan, in the mythology of Kuni-umi (the birth of the land of Japan), along with gods praised as Kumano Jyunishodaigongen.
It’s annual festival is held in October, and is a National designated important intangible folk cultural property. The festival recreates the scene of the gods descending from Takamagahara, the heavens, to this shrine, through the Kumano River, by divine boat.

Kumano where spectacular mountains, clear streams and waterfalls are, are holy sites of mountain beliefs from the Heian period (794-1185). Kumano is the sacred place for the syncretism of Shinto and Buddhism, and the yearning place that it regards as Pure Land. Retired Emperor and noblemen also traveled to Kumano for religious purification.
Before the Great Flood happened in 1889, this shrine was built in Ooyunohara, the sandbank between the Kumano River and the Otonashi River. Every pilgrim, without exception, crossed the river, dipping their feet in the cold water, as a purification ceremony when entering the sacred place. 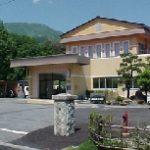 This museum renovated, by hand, a closed school and focuses on the nature and culture of Mt. Ibuki and its foothills. This museum exhibits items along with tools, such as excavated properties from the Jomon period (16,000 years ago – 3,000 years ago), and products and methods using medicinal herbs from Mt. Ibuki since ancient times.
Most of the medicinal herbs and seeds that were offered to the Impartial Court during the Heian Period, were from Mt. Ibuki Omi Province Shiga, according to the Engi-Shiki, the code of Japanese governmental regulation in the 10th century.
Ibuki mogusa (moxa used for healing) was a well-known product, which was sold all over the city during the Edo period (1603 – 1868).

Kumakabuto Arakashiko Shrine in Nanao Ishikawa, enshrines a deity from the Korean Peninsula. In Noto Peninsula, attendants with Mikoshi, a portable shrine, are elegant and fantastic, with Andon, lamps with a paper shade, and facet lanterns.
Attendants with Mikoshi, in the Okumakabuto Festival, are Wakubata, have a woolen banner. Sarutahiko is the leader of Kunitsukami, the earthly deities, and a symbol of Misogi, the practice of ritual purification by washing the entire body.
“Sarutahiko” has a red face and high nose, and dances with a unique swing, in sync with the Taiko drum at the head of the parade. Then, the parade enters Otabisho, the place where the Mikoshi is lodged during the festival. Shimada kuzushi is performed, the feat to bring to the ground the 20m tall Wakubata.
You can experience the history from ancient times, which came from continental China and the Korean Peninsula, through its unique atmosphere. 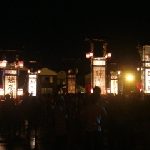 The Wajima Grand Festival is a festival where the goddess of Hegurajima Island, is located about 50km in the north from Noto Peninsula in the Japan Sea, meets the god of Wajima city once a year with the torches as a landmark. In the ritual of Torches, young people pull down the 12m torches and scramble for their Gohei, a wand with hemp and paper streamers.
In the ritual of entering the water, young man wearing colorful waistcloth of red and blue, carry Mikoshi, portable shrine and Mikoshi dances wildly for joy in the sea. The secret light, facet lanterns are elegant and fantastic attendants of Mikoshi and is the symbol to make harmony fire and water. 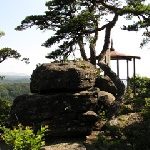 This temple was built in the beginning of the Heian period (794 – 1185), by Jigaku Daishi Ennin (794 – 864): the 3rd head of Buddhist Tendai sect, on his trip around the provinces. This temple is located at the foot of Mt. Akarusan in Kosaka Saku City.
Akasui, fragrant water, is Kudokusui, water that never dries up, in Buddhism. This temple is the sacred place of priest practices in seeking spiritual enlightenment, which has a 1,200 year history. A limpid spring springs out between rocks at the side of Kannon-do: temple dedicated to Kannon, the Buddhist Goddess of Mercy.
The way from Myosenji Temple, at the foot of the mountain, to the foot of Meisen-ji Temple to the Kannon-do with 100 stone images of Kannon, the Buddhist Goddess of Mercy, is a 30-minute hiking course. There remains Senju Kannon-do, a temple dedicated to Senju Kannon, the Buddhist Goddess of Mercy with a 1000 arms, a bell tower, and a lot of stone images of the Buddha, under the steep cliffs on the mid-slope. 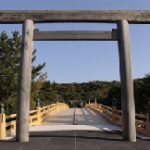 Yamatohime traveled around many provinces to seek an ideal place to enshrine Amaterasu Oomikami: Sun Goddess and the Japanese Emperors are considered to be direct descendants of Amaterasu. Isuzugawa River is also called the “Mimosuso River,” from the legend that Yamatohime rinsed her robe’s hem.
According to ancient custom, people used to purify their mind and body by the water from a limpid stream of Isuzugawa River. The Ujibashi Bridge, which crosses the Isuzugawa River at a right angle, is a bridge between the Ordinary world and the Sacred world.
The morning sun rises from the east of Mt. Shimajiyama for two months before and after the winter solstice, between the Torii, a front guard frame of Ujibashi Bridge.
In ancient Japan, the winter solstice was the beginning of a year. 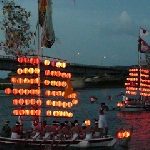 The Takatsugawa River boasts one of Japan’s foremost water quality, and a powerful warrior in the Age of Provincial Wars in the 15th – 16th centuries, Mouri Motonari (1497 – 1571) feudal lord in the western Chugoku region of Japan, to extend his clan’s power to nearly all of the Chugoku region received Hoshi-ayu, dried sweet fish of the Takatsugawa River, from Masuda Fujigane (1529 – 1597), feudal lord in Iwami Province to serve Mouri clan, after to serve Ouhi clan, as an offering.
There is a legend that the spirit of Yamata no Orochi, eight-headed giant snake in Japan mythology, which escaped from Izumo Province to the Takatsu River, and the water had boiled to become a river. In June, dragon snake made of straw are carried into the pond of the reviver’s water source by several people.
There are dance in the dynamic style to pray for rain, Mikoshi, portable shrine with lantern in riverboats to be lined up and the art of fireworks in the night sky.