This temple has the precincts over 2 million tsubo, 670ha in the whole area of Mt. Daigosan, Fushimi and is famous for Daigo no Hanami, “Viewing Cherry Blossoms at Daigo,” by Toyotomi Hideyoshi (1537 – 1598), the powerful feudal lord and Imperial Regent who unified Japan. This temple was founded in 874, by Rigen Daishi Shobo (832 – 909), as a training hall for the Shingon sect of Esoteric Buddhism.
Rigen was a pupil of the third generation of Kobo Daishi Kukai (774 – 835), the founder of the Shingon sect. This temple was built at the request of Emperor Daigo (885 – 930), and performed religious rites for the salvation of a departed soul of Emperor Daigo, in the five-storied pagoda.
The pagoda was restored by Hideyoshi in the early modern times, and remains a valuable building of the Heian period (794 – 1185). You can see a part of the 100,000 temple treasures in Reihokan museum, including Bugaku-zu, the painting of the Japanese Imperial Court Dance, of the gold leaf background paper, by Tawaraya Sotatsu (1570? – 1640?), a Japanese painter and designer of the Rinpa school.

This museum exhibits and introduces the fine arts of Japanese art, collected by the Hosomi family, over three generations, and donated by businessman, Hosomi Ryo (1901 – 1978).
Ryo had an outstanding sense of beauty, able to recognize the strictness and gentleness of the shape of things. Folding Screens of Viewing Cherry Blossoms at Yoshino was brilliantly described in detail. And the Great Tea Party.
Koko-an, with a panoramic view of Higashiyama, is the posthumous work of Nakamura Sotoji (1906 – 1997), a famous Kyoto carpenter, in the style of a tea-ceremony arbor.

The soil of Koga Shigaraki is highly fire resistant, and persevering, which are suitable for “making large objects”. This park is located on a hillock overlooking Shigaraki City. A promenade runs around the site, and large pottery works are baked in this facility and displayed outdoors.
The rich forests and the history of the Nara period (710 – 794), such as the Shigaraki Palace, overlap, which inspired potters who expressed the remnants of Japanese culture in the objects’ simplicity.

Shibatajo Castle, was also called Ayame(Iris) Castle, because its grounds were damp and many irises bloomed. The castle is a symbol of Shibata, a castle town. The statue of Horibe Yasube (1670 – 1703), stands at the front gate. Yasube was a samurai, born at Shibata Domain, Niigata and was a hero of Chushingura, theTreasury of Loyal Retainers.
And this nearby park is one of the four major Ayame gardens in Japan. 600,000 Irises across 300 species are in full bloom, in mid-June You can enjoy the early summer by looking over at the Garden spread in front of you and walking the promenade along the pond. Absolutely wonderful!

Obuse has a settlement from the ancient Yayoi period (the 4th BC – 3rd century). It prospered as the center of Kita Shinano, Nagano, during the Edo period (1603 – 1868). This was where Katsushika Hokusai (1760 – 1849): a Japanese artist of Ukiyo-e painting and woodblock printing, tried to culminate his 70 years of painting, at the end of the Edo period (1603 – 1868). Hokusai left two festival stage cars of Higashimachi, and Kanmachi, Obuse, and a ceiling painting of Gansho-in, Temple, under the patronage of a wealthy merchant.
The museum possesses and exhibits the festival stage cars and original paintings of Hokusai. The power of the ceiling painting in the cars and the vivid blue of the waves convey Hokusai’s endless passion.

This museum is in the nature and beautiful mountain scenery and in the sites associated with the To family, including Shinowakijo Castle and the garden on the ruins of their family residence.
The power of Waka, Japanese poetry, was guided by Ki no Tsurayuki (872? – 945) author, poet and courtier, in the Heian period (794 – 1185). Kokin denju, the interpretation of Kokin Waka shu, an Imperial anthology in the 10th century, conveyed the secret principles, and was established in the Muromachi Period (1366 – 1573), by To Tsunenori.
He was a samurai, the descendants of Fujiwara Teika (1162 – 1241) a famous Japanese poet, and the greatest master of the Waka, Japanese poetry. Tsunenori was the lord of Shinowakijo Castle. When he was away from the castle, he lost it. He got back his castle by sending 10 Wakas, Japanese Waka poetry, to his enemy.
The power of Waka, was “Move the sky and the earth without force”. These sites tell the history of that power. 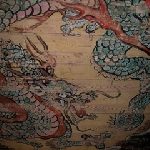 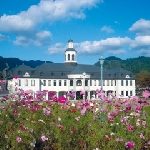 This is a historical museum that displays the life and activities of German soldiers at the Bando prisoner-of-war camp (1917 – 1918) during World War I. The German soldiers engaged in activities such as interacting with local people and the first performance in Japan of the Symphony No.9, by Ludwig van Beethoven (1770 – 1827), a German composer of instrumental music and a pianist.
And they built a good relationship of mutual respect between Japanese and Germans. It is a historical museum where you can encounter a warm-hearted history. 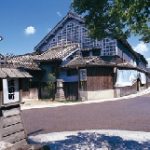 Hita flourished as a Shogun demesne in the Edo period (1603 – 1868). It has the richness of nature, including the famous mineral water from Mt. Gozendake, and was a key transportation point. The purveyors of the Tokugawa Shogunate actively interacted with Kyoto and Edo and gained enormous profits by lending money to each Kyushu Domain. They became economically rich and also offered Yama Hoko, a floata for the Gion Festival.
The streetscape of Mameda Town, lined with stucco-finished houses of merchants, is the aesthetic of the culture of the Keicho era (1596 – 1615), in Kyoto. It fused the beauty of the courtier noble in Kyoto and the samurai clan in Edo in the beginning of the Edo period. 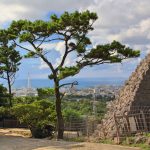 The original form of the World Heritage Site, Shuri Castle, was erected here. This was a castle (gusuku) built at the end of the 13th century, and is considered to have been the base of the ruler who controlled Chūzan (central part of the Okinawa Main Island). During the Battle of Okinawa in 1945, the hill where the castle was located was called Maeda Kōchi, but as it was used as a Japanese army fortification, fierce battles were fought and the remaining stone castle walls were lost.
At the “Urasoe gusuku Youdorekan(Guidance)”,a full scale reproduction of the interior of the West Crypt of Urasoe Youdore( tomb of a king) are exhibited.

This complex includes the prefectural art museum that was newly opened in 2007. The museum’s collection is centered on works by artists living in, or associated with Okinawa and covers contemporary art from Asian countries around Okinawa. You can meet the uniqueness in the world here.
Works of painters who were famous artists in Okinawa during the period just after World War II. Works depicting Okinawa, by Tsuguharu Fujita (1886-1968), who visited here in 1938. The restoration and development efforts of Okinawan Art, started by the Ryukyu Royal School painters, but stopped after the Disposition of Ryukyu in 1879, and ect,,. 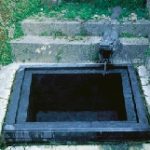 Okinawa Shurijo Castle, Zuisen gate, and Ryouhi, welling of water basin
Symbols and styles represent history and wisdom. -The King’s house and government office at Shurijo Castle were built on the hill overlooking Naha port, by a pure water spring. The Zuisen gate Ryouhi, with its welling of water basin tells the history, with its about 500 year old Dragon sculpture.
The south hall, to the right of the Main hall, was used by the examiner from the domains of Satsuma in Japan. The north hall was used for Sakuhoushi, the accredited envoys from China. The Main hall was built with the Ryukyu style, which is compromised of both Japanese and Chinese styles. The Ryukyu style shows its deep wisdom.
(On October 31, 2019, Shurijo Castle was burnt down by fire, and a fund to rebuild the Castle was established.) 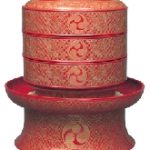 This museum possesses a Nuumeusurii, which was used for ceremonies and banquets at the castle. This is the only cultural asset brought back from Okinawa.
The centerpiece are gold and silver cups. Ukufan, for serving rice, is to the right, with the royal family emblem, Hidarimitsudomoemon and Botanshippoutsunagimonyou with Chinkin works.
Chinkin is gold-inlaid lacquerware, with patterns using thin, golden lines, made by etching grooves with a thin blade and filling the grooves with powdered gold.