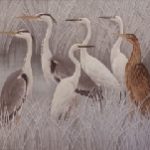 This museum praises Sato Taisei (1913 – 2004), a Japanese painter, who came from this area. The area around the museum is maintained as Fukuchiyamajo Castle Park. Sato established a unique painting style that combined the painting of flowers and birds and landscapes. It drew kindness and solidness, and his works give excitement and comfort.
The Yura River had given richness and flooding to the local people, since ancient times. People had worked to reduce the flooding for civilians coming from abroad. Here is a history that knows the value of excitement and comfort.

“His research offered much to the World Heritage List” –Minakata Kumagusu (1867-1941) was a Japanese naturalist and a pioneering ecologist. In the modern period, the Japanese government began a policy of merging local shrines. He opposed this policy and sought to stop the government from destroying shrine forests, which deeply connected folklore and culture. He gained support for his ideas and led the beginning of the nature conservation movement in Japan.
It led to the registration of World Heritage, Kumano Kodo, Sacred Sites & Pilgrimage Routes in the Kii Mountain Range. Minakata entered the mountains of Kumano for the study of slime mold and discovered many new species. This museum introduces his achievements in specimens, manuscripts, and relics. You will be touched by his Buddhist thought regarding Sui-Ten, a word coined by Minamikata. Sui Ten is the point where inevitability and coincidence intersect, and which knows many of the natural principles at once. 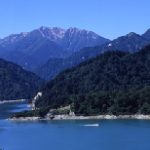 Kurobe Dam was built in Japan’s largest and deepest gorge. The unexplored region of Kurobe Gorge, contains nature close to its primitive state. There is a landscape of beauty where nature coexists with nature. The Kurobe Lake was created by dam construction. The beech virgin forest spreads in the deep green on the lakeside, and the sightseeing boat, Garube, tours around the mysterious surface of the emerald green on the lake.
You can experience the towering Tateyama Mountain Range and the magnificent Alps mountains. 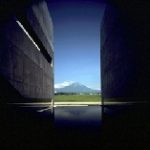 Mt. Daisen, the highest peak in the Chugoku district, is also known as “Houki Fuji.” Its northern wall is rugged. It has a 2km long folding screen-type rocky skin, formed by small explosion. Mt. Daisen was recorded Ookaminodake (Great God Mountain), and Honokamidake (Fire God Mountain) at Izumonokuni Fudoki, the Topography of Izumo Province in the Nara period (710 – 794) and had been respected here.
Shouji Ueda (1913-2000) was a photographer born in Sakaiminato, Tottori Prefecture. He did not leave Sakaiminato City, but his photographs arranged people and objects, with the background of the San-in sky, the horizon, and sand dunes. Like Izumonokuni Fudoki, you can experience the Topography of Izumo Province in the Nara Period, from his art.

The Dutch East India Company robbed Oriental trade from Portugal in conjunction with missionary work. Imari wares and Keitokuchin, Jingdezhen porcelain, pulled up from the sunken merchant ship of the Dutch East India Company, remained unfaded, hundreds of year later. With this in mind, Fine Art Ceramic Tile has been developed, made from the white sand of Naruto, for construction materials.
Kuroshio, the Japan Current, goes north and divides at the Bungo Channel and at the Kii Channel. It meets again in Naruto Tokushima and creates a whirlpool. You can experience closely the dynamic whirlpool that creates white sand, via Whirlpool sightseeing boats. 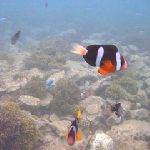 Mitoko Bay is a jewel of the southern Sea, which is in the middle of Muroto-Anan Kaigan Quasi-National Park. Strangely shaped rocks are scattered on the Rias coast, and the islands rise up from the sea, appearing as if they connect to Ryugu Castle, the dragon palace.
Takegashima Island is a green island connected by a bridge, and there is an underwater park designated by the Minister of the Environment, off the shore of the island. There are twenty-one types of coral, such as poritdae, and colorful tropical fish, such as damselfish (Chromis notata), clowfish (anemone fish), and estripey (Microcanthus strigatus).

This museum is designed by Ando Tadao (1941 -), a Japanese architect. It is on a hill with a view of the Seto Inland Sea. It has a structure that integrates the nature of the island into the museum’s interior.
Some of the works created by inviting artists to the island are exhibited in the indoor space, while others works are installed on the beach and in the forest.
Those are permanently exhibited as ” Site-specific art works” only on Naoshima Island. 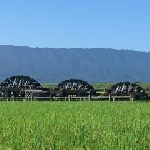 The drought had hit Asakura in 1662, where the original landscape of Japan spreads. There were someone heading for the terrible Chikugo River, which was the cause of the flooding. Life and death depended on the grade of Sansun-shibu, (19 degrees). The angle created by this gradient, enabled water wheels to pump the water without waste and moistened the fields.
This triple Water Wheel group has been activated from mid-June to mid-October for over 200 years. The glory of courage and invention does not fade. 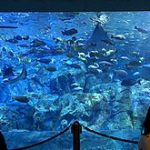 This Aquarium, which is in the front of Beppu bay and behind Mt. Takasaki, has 500 species and 1,500 exhibits of fish and animals. You can experience the breadth of fish and animals in the middle of nature. This Aquarium has the world’s first tidal current migration tank, and, since then, it has continued ecological research.
In the laboratory hall, you can observe the ecological experiments, such as the passing through the circle of the Ishidai, parrot fish, the discharge experiment of electrophorus, and the training of fish. 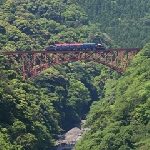 There is a trolley tour over the water source in Minami Aso. When the train enters the Takamori Yusui Tunnel, you will encounter a magical fountain of Water Pearl, the device that turns water into a sphere, via a special sound wave. The water mist flows round, mysteriously, like a pearl.
Aso is a caldera (pan-shaped terrain) created by a large, repeated eruption, approximately 90,000 years ago. Rainwater is stored in the basement of Aso and springs up and becomes the source of life.

Exhibited Paintings of beautiful Birds and Flowers is breathtaking! Japanese painter, Tanaka Isson (1908-1977), moved to Amami Oshima island at the age of 50 and continued to draw in Amami until the end of his life.
This museum’s permanent exhibitions are from the 8-year-old work showing genius of painting to works of Amami’s nature, which enabled a great leap in his abilities as a painter. After tiring of the academic circle of painters in Tokyo, he reached this south island. Isson’s life has similarities with Paul Gauguin’s (1848-1903) journey from Paris to Tahiti.

Ocean Expo Park is composed of three areas: “Ocean”, “History and Culture”, “Flower and Greenery”, and the aquarium inside the park reproduces the ocean of Okinawa down to the deep sea. “Chura umi” means “beautiful sea” in Okinawan dialect.
Okinawa Churaumi Aquarium presents the rich nature of Okinawa’s marine environment and strives to create a place where people can encounter the abundant variety of sea life found in the Kuroshio Sea surrounding these southern isles.
The aquarium’s main attraction is the “Kuroshio Sea” tank, where you can imagine whale sharks and manta rays migrate in the open sea by watching them swimming through the huge acrylic panel.