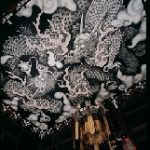 This temple was founded in 1202 by Eisai Zenji (1141 – 1215), a Japanese Buddhist priest, who brought Rinzai Zen to Japan, with the support of Minamoto no Yoriie, (1182 – 1204) the 2nd shogun of the Kamakura Shogunate.
This temple was founded during the Kenni era in Japan. Therefore, the era name became this temple name. This temple is the third rank of Kyoto Gozan, the five great Rinzai temples of Kyoto.
This temple possesses rich cultural properties. Included are: the National Treasure, Fujin Raijin-zu byobu, the folding screens of the Wind God and Thunder God, by Tawaraya Sotatsu (1570? – 1640?) a Japanese painter and designer of the Rinpa school, Fusumae, a picture painted on a sliding paper door, and the sliding screen paintings by Kaihou Yusho (1533 – 1615), a Japanese painter.
In 2002, in honor of Kenninji Temple’s 800th anniversary, an image of two dragons was painted on the ceiling of this lecture hall by Koizumi Junsaku (1924 – 2012), a Japanese painter from Kamakura.

The lecture hall of a temple is the most important in the complex of Zen temple buildings, where a chief priest of the temple guides the essence of Buddhism. The lecture hall of this temple was built in 1605 by Toyotomi Hideyori (1593 – 1615), the son of Toyotomi Hideyoshi (1537 – 1598), the powerful feudal lord and Imperial Regent who unified Japan, and is the oldest and largest lecture hall of a temple in Japan.
This hall was protected in the great fire of 1788, by Nakiryu, a roar of the rising dragon, which is one of Eight Guardians of Buddhism, and was painted on the ceiling. Nakiryu, means flutter echo which is a vibrations caused by clapping hands at the center of the hall with the hidden structure between the floor and ceiling. Nakiryu was painted by Kanou Mitsunobu (1565 – 1608), the eldest son of Kanou Eitoku, whose paintings were intelligent and peaceful.

This temple was established by Hosokawa Katsumoto (1430 – 1473), the deputy to the Ashikaga Shogunate, in 1450. Giten Gensho was invited as the first chief priest, who was at the time the fifth abbot of Myoushiji temple.
There is the Zen rock garden of white sand, with a width of 25 meters and a depth of 10 meters. It has sand prints, and has 15 stones interspersed. The meaning of this rock garden symbolized that the extreme is mysterious and depends on the free interpretation of the viewer.

This temple is the branch temple of Daitokuji Temple in Kyoto, which was restored by Takuan Zenji (1573 – 1645), a major figure in the Rinzai school of Zen. This temple is located by Kinosaki Onsen, hot spring, which is close to Izuchi Town, the hometown of Takuan.
This temple has a stone garden, “Seikan-tei”. The garden is Karesansui, dry landscape garden and the famous water from Kinosaki Onsen, developed during the Nara period (710 – 794), springs out. The water is called the water of Dokko, which means Gilt-bronze Single-pronged Vajra, a weapon used as a ritual object to symbolize indestructibility and irresistible force.
Takuan guided Kenzen ichimi, Swordsmanship and Zen are one and the same, of Fudochi Shinmyo Roku, the miracle Immovable Wisdom, to Yagyu Munenori (1571 – 1646), a feudal lord and swordsman. Munemori, was an instructor of martial arts to the Tokugawa Shogun family.
You will encounter the Swordsmanship of Yagyu, which keeps unconscious and allows you to watch various movements without being caught.

The area of Minami-Uonuma used to be called Ueda no sho, Village. It is the start of the Mt. Makihatayama trail, covered with rich alpine plant and virgin forest. Mt. Makihatayama is listed as one of the 100 most famous mountains in Japan. Naoe Kanetsugu (1559–1620) was a senior retainer of the Uesugi clan, and served Uesugi Kenshin (1530 – 1578), the feudal lord of Echigo Province and his nephew, Uesugi Kagekatsu. Kanetsugu grew up in this temple of the Soto school of Zen at Ueda no sho.
This temple was built during the Nara period (710 – 794), and was restored by the Uesugi family, who was Kanto Kanrei, a shogunal deputy for the Kanto region, in the Muromachi Period (1366 – 1573). Both Uesugi Kenshin and Takeda Shingen (1521 – 1573), the feudal lord of Kai Province, studied under Hoko Zenshuku Osho, the 10th head priest of this temple. The two also fought each other.
That relation made ”Tekini Shio wo okuru – To show humanity even to one’s enemy”, based on when Kenshin supported Shingen, during the difficult time of Kai Province. 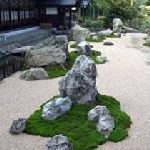 Kankoji Temple located in Minami Uonuma City, Niigata, used to be the practice place for guards of Hokuetsu: Shinshu, Sado, Noto, Echichu, and Echigo provinces during the medieval ages. Many halls of the practice palace were destroyed by the Siege of Otate, a battle between the nephew and adopted son of Uesugi Kenshin (1530 – 1578), the feudal lord of Echigo Province, over Kenshin’s inheritance.
Kankoji was restored in the Edo period (1603 – 1868), by inviting Mangen Osho, a Buddhist priest, from Kankoji Temple in Yonezawa, Fukushima, where the Uesugi family moved, and by moving the palace to the present site from the original site in the mountains. The main temple built in 1776 and the garden shows the beauty of the Zen temple in the early modern times and conveys the spirit of the medieval ages.

This temple was founded in 1497 by the Sanjo Nagao clan which was the deputy military governor of Echigo Province, Niigata. Uesugi Kenshin (1530 – 1578), the feudal lord of Echigo Province, also studied at this temple from age seven to fourteen, and the foundation of his personality was formed. The Hengaku, temple’s name tablet displayed on the gate, was hand-painted as “Daiichigi, the first principle” by Kenshin, which is stored in the Treasure hall.
There are the grave of Kenshin, and a memorial tower of the war dead in the Battles of Kawanakajima. Somon, the main gate of the temple was relocated from Kasugayamajo Castle, which is the only remains of the castle.

The Budhha hall of this temple was the great work of Yamagami Zenemon Yoshihiro, who was Ondaiku, a carpenter for Kaga Domain, Ishikawa. The hall worships a Buddha triad, a Buddha attended by two Bosatsus (Bodhisattvas), Monjyu Bosatsu, associated with wisdom in Mahayana Buddhism, and Fugen Bosatsu, associated with practice and meditation in Mahayana Buddhism, from the Ming Dynasty (1368 – 1644) in China. This building was made of all Keyaki, zelkova wood, which has beautiful woodgrain. This lead plate roof is the same as Kanazawajo Castle Ishikawa Gate, and this interior was built with a wooden framework structure, also like Kanazawajo Castle. This building was in the very traditional Zen-style architecture, which was complex and curious.
This temple was built as the family temple of Maeda Toshinaga (1562 – 1614), the 1st feudal lord of Kaga Domain, by Maeda Toshitsune (1594 – 1658), the 3rd feudal lord of Kaga Domain. Toshitsune’s wife was a daughter of Tokugawa Hidetada (1579 – 1632) the 2nd Shogun of the Tokugawa Shogunate, whose younger sister was Toufukumon’in Masako (1607 – 1678), a daughter of Tokugawa Hidetada, the 2nd Shogun and Chugu, (second consort of the emperor) (1625 – 1629) of the Emperor Go-Misuno. Toshitsune was familiar with the culture of the Obaku sect of Zen Buddhism, which was introduced to Japan from China during the Ming Dynasty (1368 – 1644) , in Kyoto, through Toufukumon’in.

This temple is surrounded by 100 years of giant trees, has three gardens in the different styles of Zen and Daimyo, Japanese feudal lord. The stone wall following the approach has a natural treasure, Luminous Moss, which emits an emerald glow, when exposed to light, from the chloroplasts contained in its cells.
This temple was restored in the Edo period (1603 – 1868), after it suffered from disasters of the wars between the Takeda clan and the Oda clan in the Age of Provincial Wars in the 15th – 16th centuries. Luminous Moss withers during the winter and revives after cherry blossoms.
The value of this temple, with original and natural glow, like Luminous Moss, is well-preserved. 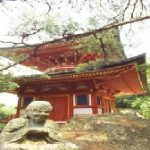 This temple was established in 1397 by Guchu Shukyu (1323 – 1409), a priest of the Rinzai sect, who went to study in the Yuan Dynasty (1279 – 1368). Guchu studied in Kyoto under Musou Soseki (1275 – 1351), a Rinzai Zen Buddhist monk and Kokushi, national Zen teacher.
He went to China by Tenryuji bune, trading vessels dispatched to the Yuan Dynasty (1279 – 1368) in order to raise funds to build Trenryuji Temple, a structure planned by Soseki, in the period of the Northern and Southern Courts (1336 – 1392). At age 75, Guchu came to Aki Province Hiroshima, in order to open the greatest pure Zen practice place in Japan and servicing for Tenneiji Temple in Kyoto.
Kyomokyo bridge, where it is said that big snake appears and threatens imprudent person to cross, is a spiritual cleansing barrier of this temple. The mountain stream under this bridge is called Katsuryu River, the river of resuscitation. In the fresh green season, Aomomiji, green maple, maple trees not yet turned red, fills the bodies of people who cross the bridge. Please enjoy bliss. 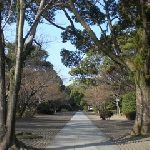 The Former residence of Hosokawa Gyobu family is currently closed due to the Kumamoto earthquake in 2016. The residence has the formality as the residence of a high ranking samurai. It has Gogenkan, the front entrance, with a Karahafu-style cusped gable, Onkyakuma, a drawing room, Omote Shoin, a reception hall, with the cloister. The main building is connected Shunshokaku with 2 stories, drawing room. The separate building has Kanseitei, a tea-ceremony room, and a drawing room of Japanese style. Another one is Gohozo, a treasure house. The Hosokawa Gyobu family, started from Hosokawa Okitaka, who was Hosokawa Tadaoki’s fifth son, and the younger brother of Hosokawa Tadatoshi (1586 – 1641), the first lord of Higo Domain. The family had been supporting the great clan for a long time, serving the lord. The aesthetics of life appears in the stone pavement in front of this residence.