Asai clan, a feudal of Nagahama, formerly named Imahama was ruined in 1573. Toyotomi Hideyoshi (1537 – 1598), the powerful feudal lord and Imperial Regent who unified Japan, changed the name of Imahama to Nagahama, in order to show respect to Oda Nobunaga (1534 – 1582), the legendary warlord and the military dictator.
Nagahama was an important transportation hub and Hideyoshi had his first castle, Nagahajo Castle, here. He built this castle by carrying lumber from Chikubushima Island, the island where God resides, located in front of Nagahama. This museum introduces the history of northern Lake Biwa and Nagahama, which has continued since the Jomon period (16,000 years ago – 3,000 years ago).
You can overlook the philosophy of Pure Land and the rich aesthetic sense inherited by Omi shonin, the merchants of Omi Province, Shiga, who emerged all over Japan in the early modern time. 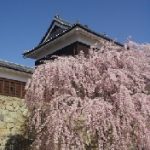 Uedajo Castle Park is surrounded by flowers and greens, with the 100-year-old row of Keyaki, Japanese zelkova. The castle of a feudal lord, Sanada clan stands still in the park. This castle was built in the center of the Ueda basin by Sanada Masayuki (1547 -1611) a feudal lord and a vassal of the Takeda clan, during the Azuchi-Momoyama period (1573 – 1603). This castle has the history of twice defeating the attacks of large armies of the Tokugawa clan, with limited military force.
The castle ruins mainly composed of defense moats and earthworks, and works associated with the Sanada clan, introduced at the Ueda City Museum in the castle, tell us about the Sanada insight to master rationality. 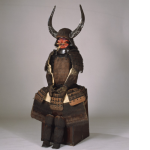 This museum exhibits a number of Daimyodougu, Japanese feudal lord’s belongings, handed down to the Owari Tokugawa family. The armor was worn by Tokugawa Ieyasu (1543 – 1616), the founder of the Tokugawa Shogunate.
The helmet is shaped like a water-buffalo horn. The armor was implanted with bear’s hair. It’s string and leather were connected with black thread. The whole body is black and the beaver is crimson, which vividly stands out.
This armor design is eccentric and clearly shows the characteristics of Tosei Gusoku, the armor of the style in the Age of Provincial Wars in the 15th – 16th centuries. It is made of large plates, especially compared with earlier armors.
This was the important relics of Ieyasu, which was laid in a special place in the small castle tower of Nagoyajo Castle in the Edo period (1603 – 1868).

This shrine is located at Mt. Houraijisan (684m). This Toshogu shrine used to be in the Shogun‘s Edo castle. Tokugawa Iemitsu, the third shogun (1604 – 1651), moved the shrine, when he founded this location. This shrine was built to show gratitude to Tokugawa Ieyasu (1543 – 1616), the founder of the Tokugawa Shogunate.
The name of Mt. Houraijisan came from Horijisan temple, which was founded by Rishu Sennin, an ascetic during the 6th century who carved Yakushi Nyorai, the Buddha of Healing, out of seven, sacred cedar trees. In 703, Emperor Mommu (683 – 707) built the temple, and named it as Houraiji temple for the gratitude of recovering from his illness.
An 800-year-old cedar stands over the mountain gate and the Nio mon, a Deva gate, which were built by Minamoto no Yoritomo (1147 – 1199), the 1st shogun of the Kamakura Shogunate.

This temple was founded in 1320, which was the place of standing up against Tokugawa Shogunate party by Takasugi Shinsaku (1839 – 1867), a samurai from Choshu Domain of Japan who contributed significantly to the Meiji Restoration.
This temple was built in the traditional Chinese-style architecture, which was the traditional Zen-style architecture in the Kamakura period (1185 – 1333). This roof is in the Irimoya Zukuri style, with a hip-and-gable roof structure and Hiwadabuki, cypress bark roof, which is masterly curved and suppressed for stability.
This temple has Hengaku, the temple’s name tablet displayed on the gate, of Kinzan which was an Imperial scroll, written by Emperor Go-Daigo (1288 – 1339), who successfully overthrew the Kamakura shogunate and brought the Imperial House back into power (1333 – 1336). The Ashikaga shogunate split the imperial family into two opposing factions between the Ashikaga backed Northern Court situated in Kyoto and the Southern Court based in Yoshino Nara led by Go-Daigo and his later successors.
This principal image of Buddha is a seated statue of Senju Kannon, the Buddhist Goddess of Mercy with 1000 arms, which was Yosegi zukuri, the technique of assembling wood blocks, treated and carved, made of cypress wood. The tails of this statue’s eyes are raised up, and its lips are pressed. Its face is noble. The statue is realistic, which is typical in the end of the Kamakura period (1185 – 1333). It is said that the statue was made by Unkei, a sculptor of Buddhist statues in Kyoto.

The museum possesses approximately 12,000 items, including hanging scrolls, folding screens, drawn by modern poets, Japanese traditional poetry, old documents, painters, calligraphers, experts in the tea ceremony, monks, Busho (military commander), politicians, and literary men, from the Heian period (794 – 1185) to modern days.
This museum exhibits those and also holds special exhibitions of modern art. This folding screen was drawn by Tosa Mitsuoki (1617 – 1691), a Japanese painter and head of the Tosa school in Yamato-e. Mitsuoki revived the Tosa school with the size and decoration of the early modern scale.
The appearance of Kono Michinobu (1522 – 1581), the 38th head of the Kono clan in the participating war, as the Minamoto’s army was reproduced with the refinement of the early modern times, by Mitsuoki

This shrine possesses and exhibits the masterpieces of the end of the Heian period in the 12th century. Konito Odoshi Yoroi, Armor with navy blue lacing, with Osode, large sleeves and a war helmet, was dedicated by Kouno Michinobu (1156 – 1222) warlord of a powerful clan in Iyo Province.
The enshrined deity, Oyamatsumi no mikoto, a god of mountains, sea and war in Japanese mythology, had been worshiped by successive imperial courts and warriors.
There are 8 national treasures and 75 national important cultural properties in their dedication treasure. This shrine is the Samurai Beauty Hall of Fame.
Hitori Sumo, the act of mimicking two people sumo wrestling, to pray for a good crop on May 5th and the Nuibo-sai Festival, a rice-harvesting ceremony on September 9th are held according to the Japanese lunar calendar since ancient times.

This museum is located on Oshima island on the Shimanami Kaido, 60 km long toll road that connects Japan’s main island of Honshu to the island of Shikoku, passing over six small islands in the Seto Inland Sea. The Noshima Murakami clan was the family of Murakami Ancient Navy.
This museum preserves materials and books of the Noshima Murakami clan, which had the mastery of the Seto Inland Sea in the Age of the Provincial Wars in the 15th – 16th centuries, gained wealth from sea trading.
This museum introduces Noshima Mare, which was the secret of the Seto Inland Sea. And the boat to experience the tidal current, sails from the front of this museum. You can feel the dynamism of Murakami Takeyoshi (1533 – 1604), naval commander, head of the Noshima Murakami Ancient Navy.
He fought for maintaining the mastery of the sea and also held Utakai, a poetry competition. 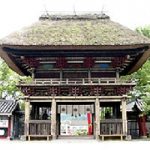 This temple faces the Kuma River and has the original style architecture combined with the splendid decoration of the Azuchi-Momoyama period (1573 – 1603) and the strong uniqueness of the Kuma region, which had been built for four years since 1609. The roof ridge is high and the slope is steep. The roofing is made of grass.
All of the shrine buildings are black-lacquered at their base, the details of the wooden structure are vermilion-lacquered and the sculpture and design patterns are richly colored. These architectures and designs are the true value of the lord of the Domain, the Sagara family, which had a 700 year history, since the Muromachi Period (1366 – 1573).

This museum exhibits some 90 rare old guns from the world, including the first Hinawajyu, matchlock gun that arrived in Japan from Portugal. This museum guides well the history of Tatara, an iron manufacturing method that uses iron sand, in Tanegashima Island, used for the domestic production of Hinawajyu.
This museum explains the relations with Sakai-shu, the merchants who organized self-governance in Sakai in the Muromachi Period (1366 – 1573). In the Kinai region, provinces surrounding Kyoto, Nara, and Negoroshu, a group of monk warriors based in Negoroji temple, Ki Province, made Zaigabachi, a helmet for Saikashu, a group of trading warriors from around the mouth of the Kinokawa River Ki Province.
You understand well the overlapped way of the Kuroshio, the Japan Current and guns, and the speed of changing history.