This garden adjacent to Hikonejo Castle and borrowing its views was landscaped by Ii Naooki (1656 – 1717) a feudal lord, the 4th -9th lord of the Hikone Domain, in 1677. This name came from the garden of Chinese court. There is a large pond imitating Lake Biwa to have Omi Hakkei, Eight Views of Omi, which had been associated with the Views of Dongting Hu, China. Rintchikaku, the style of a tea-ceremony arbor stands out from the pond. Housoudai, is Kyakuden, the reception hall with an intentionally contrived design on the Chikuzan, an artificial hill.
This garden of beauty overlaps in multiple layers, like the concepts of Taoist immortality in the scenery, and the scene of Pure Land in the traditional Zen-style architecture. Aware, sorrow of aristocrats and Apare, admirable of samurai play together in the beauty scenes. 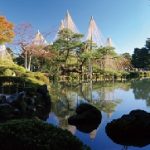 Ishikawa Kenrokuen is one of the three most beautiful gardens in Japan, as well as Mito Kairakuen and Okayama Korakuen. Its theme is the Taoist immortality. Maeda Tunanori (1643 – 1724), the 5th lord of Kaga Domain made this garden in the 17th century, and made 3 islands in the calabash shaped pond, Hisagoike, to resemble immortality islands, Hourai, Houjyou and Eishu, where the Taoists live.
He bridged the innocent nature’s thoughts on longevity, which originated in Chinese Taoism, and the prosperity thoughts of his descendants from Confucianism.This garden represents beauty that doubles as the idea of conflict.
– There are also October cherry blossoms, too. They make flowers bloom intermittently, with a pale red color.

The Echizen coast has a variety of quay walls formed by the rough seas, and there are many legends such as Kameshima, where turtles have become rocks, and the footprints of God who helped people from drought. Fukui was ruled by the Tatsudaira lord family in the Edo period (1603 – 1868). They were relatives of the Tokugawa Shogun family.
This garden near the north of the keep of Fukuijo Castles remains. It was built by the founder of this Domain, Yuki Hideyasu (1574 – 1607) who was the 2nd son of Tokugawa Ieyasu (1543 – 1616), the founder of the Tokugawa Shogunate.
It was called Osensui Yashiki, a town house villa built for the lords of Fukui Domain. It is a famous garden where the view from the boat and the villa was carefully considered.

Nagoya Castle was built at the ruins of the castle Nakoya, where Oda Nobunaga (1534 – 1582), the legendary warlord and the military dictator, was born.
Shogun Tokugawa Ieyasu (1543 – 1616), the founder of the Tokugawa Shogunate, built Nagoyajo Castle tower by carrying rafts of cypresses from Kiso mountain to Kuwana, Nagoya. He built a castle tower, using an unprecedented layering approach, having both a detailed design and stability.
Tokugawaen is a daimyo garden, a garden style that features a path around a pond. This garden used to belong to the Ozone residence, the retired house of Tokugawa Mitsutomo, the 2nd lord of Nagoyajo Castle.
This garden resembles the Kiso River, which flows from Mt. Ontake to Ise bay, by making use of the height difference of the land. 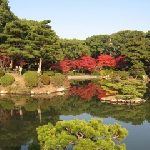 This garden was created by Asano Nagaakira (1586 – 1632), a 1st lord of Hroshima Domain, as a separate residence garden from 1620. This garden was landscaped by Ueda Soko (1563 – 1650), the chamberlain of the Hiroshima Domain and the founder of the Ueda Soko school for the Japanese tea ceremony. Soko gathered a number of scenic spots in his designs, including a small version of Sai Lake in Sung China.
Shukkeien, in Japanese, means “reduced scenic garden.” This Japanese tradition builds from the finest, elaborate architecture and art. It is fully demonstrated at this garden. 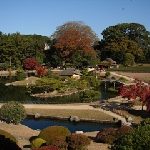 The artificial hill in this garden, Yuishinzan, was made in front of Enyoutei, the living room of the feudal lord, with the measured distance from time and position of rural scenery above Mt.Misaoyama. The rural scenery was also overlapped with a meandering stream landscape in front of Enyoutei. Everything in the landscape was measured well in order to enjoy the view.
Since ancient times, Japanese have been awe-inspired by nature. The beauty of Samurai, used the power of nature to live and survive. This garden overlooking Okayama Castle is a theme park of a Japanese garden, and river earthen walls to protect the castle, too.
Everything was measured and thought well. 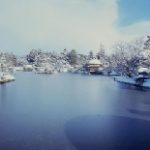 This garden is a Daimyo Teien, gardens of Japanese feudal lords, with four large and small islands floating in a pond, which was landscaped by Kobori Enshu (1579 – 1647), a feudal lord, a master of the tea ceremony, an architect and garden designer. It imitated the Sento Imperial Palace in Kyoto.
This used to be a Reception Hall, where the lord met the retainers and envoys of other Domains. It was also the retreat of the lord. Therefore, it has Kirei sabi, rich beauty and refined simplicity, with characteristics of feeling free by adding motif and designs everywhere.
It is reminiscent of the Japanese understanding that prayer is for climate and nature, and harmony shifts with those.

This garden was made in 1668 by the Kyogoku clan, which was the feudal lord of the Marugame Domain. It has Matsubara, a beautiful scenic stretch along a sandy seashore, dotted with pine trees. It also has Hakkei-ike, a pond from Biwa Lake in Omi Shiga, and eight islands in the pond from Omi Hakkei, Eight Views of Omi. Omi was the place where the Kyogoku clan came from.
The Japanese had accepted Aware, the sorrow from understanding that harmony shifts with climate and nature, and places the beauty of the senses on those. This garden delivers the beauty of the senses.
It has its own theme that everything in the universe, and the universe is inside the garden. It is very magnanimous in its attitude of the mind. This museum exhibits Western paintings by masters such as Jean-Francois Millet (1814 – 1875), the French painter and one of the founders of the Barbizon school, and Henri Rousseau (1844 – 1910), a French primitive painter.
That is a fusion beauty and wisdom.

This garden is Daimyo Teien, gardens of Japanese feudal lords during the Edo period in the 17th -19th century, which benefits from the scenery of Mt. Shiunzan. The foundation of this garden was made by planting around Nanko Lake, in the period of the 4th lord of Sanuki Domain, Ikoma Takatoshi (1611 – 1659).
The garden was refined by the grandson of Tokugawa Ieyasu (1543 – 1616), the founder of the Tokugawa Shogunate, Matsudaira Yorishige (1622 – 1695), a feudal lord, the son of the first lord of the Mito Domain, the elder brother of Tokugawa Mitsukuni, and his descendant of the Matsudaira clan over the span of 110 years.
The name of this garden, Ritsurin, means Chestnut trees which also meant an undeveloped woodland near populated area, in China. But 1,400 pieces of evergreen pine trees instead of Chestnut trees are planted in this garden with stones and water which create the scene of the ultimate garden. 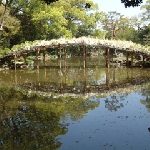 This garden site used to the part of Hama Goten, palace, which was made by reclaiming land in the sea. Date Munetada (1792 – 1889), the 7th castle lord of Uwajima domain, made this garden at the site in 1868, which has Shatsukei, borrowing the landscape of Onigajyo Mountains This garden is a Japanese style garden with a path around a central pond. Date family ancestors were the Fujiwara clan, a powerful family of regents in Japan. Their family crest is wisteria. By that connection, many wisterias were planted at this garden.
This garden’s name came from the poem of Date Masamune (1567 – 1636), a Japanese feudal lord, the founder and the first lord of the Sendai Domain, which was made later in his life. That poem says “Without enjoying, what should we do in the life. The remnants of my life will depend on the forgiveness by heaven” Tensha means forgiveness by heaven.
The year this garden was made, 1868, was the End of the Edo period. Through this garden, you can see the resolution of the intellectual lord with insight at the end of the Tokugawa period. 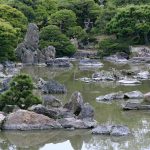 A Japanese-style restaurant with an attached inn, Ohana was built in 1738 as the villa of the Tachibana clan, a feudal lord of Yanagawa Domain. At present, you can visit the gardens, Shotoen and historical museums as tourist facilities. The museum exhibits the helmet and armor worn by Tachibana Muneshige (1567 – 1643) , a feudal lord, the 1st lord of the Yanagawa Domain.
There is also Tachibana clan’s Daimyodougu, Japanese feudal lord’s, belongings. Muneshige participated in the West Squad in the Battle of Sekigahara in 1600 in order to repay Toyotomi Hideyoshi’s favour, whether it won or lost. He was defeated and his domain was confiscated.
However, he was the only defeated feudal lord who came back to his previous Domain in the Age of Provincial Wars in the 15th – 16th centuries, after the Battle of Sekigahara. 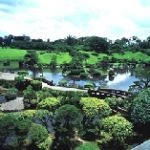 Suizenji Temple used to be located by an underground spring that brought water from Mt. Aso. The Hosokawa family made Daimyo Teien, gardens of Japanese feudal lords, around the spring pond, which is a Japanese style garden, with a path around a central pond, from the Azuchi-Momoyama period (1573 – 1603). Each place in the garden resembled the famous spots of Tokaido, the route connecting Kyoto and Edo, Tokyo’s name in the Edo period.
Hosokawa Fujitaka Yusai (1534 – 1610) the founder of the Hosokawa family in early modern times, did Kokin denju, the initiation about the interpretation of Kokin Waka shu, the Imperial anthology in the 10th century, to Prince Toshihito. The Prince was the grandson of Emperor Ogimachi (1517 – 1593) and the founder of the Katsuranomiya family, and built Katsura Rikyu Imperial Villa, at Kokin denju no ma, the reception hall.
The Kokin denju no ma was relocated here from Kyoto Imperial Gardens.