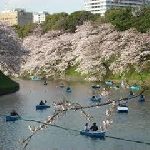 Chidori means migratory birds and the symbol is another name for Japan, Mizuho, the Land of Vigorous Rice Plants. This way is a trail of approximately 700 meters along the Chidori-ga-fuchi, the west side of the Imperial palace. Somei yoshino (Prunus yedoensis) and Yamazakura (wild cherry tree) and others are planted. In spring, from Chidori-ga-fuchi Park to Green way, it is one of Tokyo’s leading cherry blossom landmarks.
From the end of the Heian period to the Kamakura period, in the 12th–14th century, Tokyo was the transportation hub at the waterside for carrying supplies from Chichibu, Musashi country, to Kamakura.
The Chidori-ga-fuchi was created by dividing the Hanzo-bori Moat, made in the Edo period (1603–1868), into two, by the construction of a road in 1900.
The view is the remnants of Edo in the Medieval Ages, too. 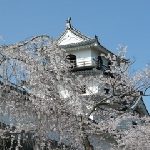 Shiraishijo Castle was restored after the Great East Japan Earthquake of 2011. This castle is located in the center of Shiraishi City, which has, since ancient times, prospered as an important point of entry into Oshu (Northern Honshu, the region encompassing Mutsu and Dewa provinces) from the Kanto region, in East Honshu.
This castle was built on the backdrop of the Zao Mountain Range, and was a place where the Ouetsu-reppan alliance, Alliance of the Domain of Mutsu, Dewa and Echigo, as shogunate forces, was signed during the Boshin War (1868-1869), the Japanese civil war between Imperial and shogunate forces. The Reppan conference, a conference of many feudal clans was held at this castle for the petition for mercy to the Aizu Domain and the Shonai Domain.
The conference was called by Otsuki Bankei (1801 – 1878), a Chinese scholar, who was the son of Otsuki Gentaku (1757 – 1827), a Dutch scholar and known as the father of modern science in Japan. Bankei was a controversialist of Sendai Domain, Miyagi, Mutsu Province. The Domains of Mutsu, Dewa and Echigo formed the alliance with Rinoji no Miya, the imperial Abbot of Nikko, as its leader. 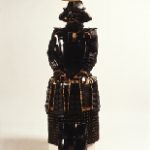 This museum possesses about 98,000 items, mainly cultural assets from the Date family, which is located at the site of Sendaijo castle’s third bailey.
The armor has an impressive crest in a crescent shape. Its body armor was made of 5 black-lacquered iron plates, and 9 tassets, made of six plates. Its helmet is a Sixty-two Plate Riveted Suji Kabuto Helmet, with an inscription reads “Munehisa”. It is elegant and fashionable, and it is exactly Omote Dogu, official utensils for Datemono, dandy, Date Masamune (1567 – 1636), a Japanese feudal lord, the founder and the first lord of Sendai Domain.
Successive feudal lords of Sendai Domain, and retainers had followed this style, and the black-lacquered armor with 5 pieced cuirass is also called the Sendai Body Armor.

Tsurugajo Castle in Aizu-Wakamatsu City is a fine castle that survived a fierce, one month during the Boshin War (1868-1869), the Japanese civil war between Imperial and shogunate forces. Gamo Ujisato (1556 – 1595), a feudal lord who was both a good warrior and a good scholar, developed the castle town, built a castle tower, and founded this castle. There is a tea-ceremony room within the wall of a castle.
Ujisato was the leader of Rikyu shichitetsu, the seven disciples of Sen no Rikyu(1522 – 1591)the greatest tea master and the tea master to the military dictator of Japan, Oda Nobunaga and Toyotomi Hideyoshi. Rikyu invented the wabi-sabi style of tea ceremony. After Rikyu committed suicide, Ujisato sheltered Rikyu’s son, Shoan and labored to rehabilitate the Sen family. It was told that Shoan designed the tea-ceremony room for Ujisato.

The Hakodate magistrate’s office, was established by the Tokugawa Shogunate in Edo when the Shogunate opened Hakodate Port at the End of the Edo period (1603 – 1868). It was built in Goryokaku, and became the center of the governance of Ezo, Hokkaido. Goryokaku became the site of the last battle of the Boshin War (1868-1869), the Japanese civil war between Imperial and shogunate forces. The Hakodate magistrate’s office building was dismantled by the Hokkaido Development Commissioner in 1872.
The first election in Japan was held by the former Shogunate forces aiming for the Republic of Hokkaido. The office restored in 2010 tells our mind the history.