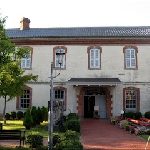 In this square, the first Nagahama Station, built in 1882 as the starting station of the Hokuriku Line, is preserved. It is the oldest existing station building in Japan. The station building is a Western-style building with two-stories, designed by an English engineer.
The features of the station building remain unchanged, such as the stationmaster’s room and the waiting room. Nagahama Tetsudo Bunkakan, the Railway Culture Museum, exhibits historical materials about the transportation at Biwa Lake, and Hokuriku Line Electrification Memorial Hall displays a D51 style of steam locomotive.
You can see the transition of the railroad from modern to the present times! 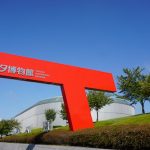 “The Symbol of Made In Japan,Toyota Motors!” – The main exhibits at the Toyota Automobile Museum are about 140 vehicles from around the world. This museum presents the history of the automobile in a more approachable manner, and shows how the interaction between Japanese and foreign carmakers stimulated and accelerated the evolution of the auto industry throughout the world.
Under the theme of “Mobility and culture- Mobility fosters culture and culture encourages mobility,” the Car Cultural Materials Room exhibits approximately 4,000 cultural materials related to automobiles, such as posters, car toys, and car mascots. 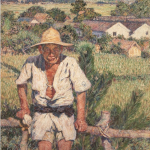 The museum was opened in 1953 to praise the virtues of Western painter Kojima Trajiro (1881 – 1929), who was born in NARIWA Town.
A farmer in Sakazu, (Kurashiki City), 1914, by Kojima Trajiro – It is his enthusiastic work that Trajiro tried to apply, in the Japanese context, the expression and the light technique learned in Belgium during his study abroad in 1914. For the chimney of the Obie Copper Mine, he painted directly on the canvas, without using a brush, to create a haziness above the surface.
The background was made up of delicate dots and lines, along with the person and the pine tree behind him. He used the original colors as they are, and drew a summer day when the sun shined brightly.
– After returning from Belgium, he married and lived in Sakazu, in 1913.The future was shining, too.

The waterway is now connected by three suspension bridges and two cable-stayed bridges, which were used to carry rice from Sanuki Provice, to Kurashiki, the Shogun demesne, in the Edo period (1603 – 1868). Those long bridges have a two-layer structure.
The upper part is the Seto-Chuo Expressway, with 4 car-lines and the lower part is the JR train Honshibesan Line. Kitabisansetohashi Bridge is a suspension bridge, which has a bridge girder 65 m above the sea level and easily passes the world’s largest large-scale vessels of 500,000 ton class.

This train began in 1888 and is the first light railway in Japan. This train was a steam locomotive in the Meiji period (1868 – 1912), which became a diesel train. Soseki Natsume (1867 – 1916), a Japanese novelist, best known around the world for his novel, Botchan, had problems in Tokyo and moved to Matsuyama City in 1895, as a junior high school teacher, in the old education system.
– Later he wrote the novel Botchan based on his stay in Matsuyama at that time. In the novel Botchan, the Iyo Railway in the light rail days appeared as a ” Train like a matchbox”. A train of the same shape as the “Botchan train” of the light rail days was revived, in the Heisei period (1989 – 2019). 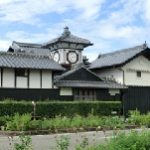 Ruins from the Yayoi period (the 4th BC – 3rd century) are scattered along the Aki River terraces in eastern Kochi Prefecture.
Soga Akae (born 623), a senior regent in the court during the Asuka period (550 -710), was exiled from the capital in 672 during the Jinshin War, a war of Imperial succession between Prince Oama and Prince Otomo, the son of Emperor Tenchi (626 – 671). The descendants of Soga Akae became the Aki Clan, a powerful, local family that owned Aki Gosengan (10,000 koku, a unit of volume of rice in Aki Province) in the Age of Provincial Wars in the 15th – 16th centuries, and were the most powerful clan in the eastern part of Tosa Province, Kochi.
Around 1887, during the Meiji period (1868 – 1912), Hatakenaka Genma (born 1861), a landowner in the area, created this Clock Tower. His father bought Genma a Hakaku Tokei, an octagonal-shaped clock, made in the USA, when Genma was 10 years old.
He repeated to disassemble and assemble the clock, and learned its mechanisms. Based on his understanding, he made every part of this clock by hand and completed this Clock Tower to inform the local people of the time of day.
Doing pragmatic things for others is the DNA of Aki Gosengan. You can watch it, too. 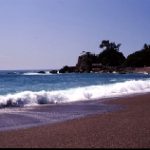 This museum is located at a famous spot, Katsurahama beach, between Ryuzu Cape and Ryuo Cape. This beach is bow-shaped and was mentioned as “the moon shadow to come out from the surface of the sea” in a poem.
The reason for this museum’s location is that Sakamoto Ryoma (1836 – 1867), a low-ranking samurai from the Tosa Domain became a lordless samurai by crossing the pass from the Tosa Domain. He influenced the Meiji Restoration, the establishment of the Empire of Japan, when he returned Tosa Province finally from this beach.
Nakahama Manjiro (1827 – 1898), was one of the first Japanese to visit the USA. He was an important translator. Kawada Shoryo (1824 – 1898), was a Japanese painter, who trained younger generations in Kochi. After Manjiro returning to Japan, Shoryo investigated Manjiro in Tosa Domain Kochi. Shoryo understood foreign affairs through his visual imagination.
Ryoma learned commerce by navigation strategy from Shoryo. Ryoma also understood strategy by overlapping it with this scene of the moon leading the tide and returning it.

This museum is on the riverbank leading to Katsurahama beach, which is surrounded by greenery and water. This building is rooted in the Tosa climate, using Tosa plaster on the wall and Tosa tile on the roof. It possesses the works of more than 400 artists, including Marc Chagall (1887 – 1985).
This museum possesses art works of Kawada Shoryo (1824 – 1898), such as Seiobo, an ancient Chinese goddess. He was a Japanese painter, who learned the Kanou school of painting in Kyoto and trained younger generations in Tosa Province Kochi.
Nakahama Manjiro (1827 – 1898), was one of the first Japanese to visit the USA. He was an important translator. After Manjiro returned to Japan, Shoryo investigated Manjiro in Tosa Domain Kochi. Shoryo understood foreign affairs through his visual imagination.
Sakamoto Ryoma (1836 – 1867), a low ranking samurai from Tosa Domain, who influenced the Meiji Restoration, the establishment of the Empire of Japan, learned commerce by navigation strategy from Shoryo. 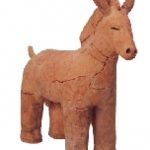 Tagawa City is located in the central part of Fukuoka prefecture. Tagawa has rapidly developed since the Meiji period (1868 – 1912), as a charcoal metropolitan of the Chikuho Coalfield. It is also the birthplace of the famous Tanko Bushi folk song.
The museum tells its history, which possesses the collection of Yamamoto Sakubei (1892 – 1984), a Japanese coal miner and painter.
The collection of Historical Coal Mine Paintings is listed at UNESCO Memory of the World Register. These paintings depicted not only the mining work, but also life of the people who worked in mining.

This museum next to Nagasaki Seaside Park, was opened in 2005, which is a 15-minute walk from Nagasaki Station, and overlooks Nagasaki Port from the rooftop. The concept is a “breathing museum”. The base collection is the collection of Suma Yakichiro (1892 – 1970), who was the appointed envoy extraordinary and minister plenipotentiary to Spain, and collected art works during the World War II.
This museum introduces Spanish art adding modern art such as Pablo Picasso (1881 – 1973), the Spanish artist who lived in France, Salvador Dali (1904 – 1989), a Spanish surrealist painter, and Art works associated with Nagasaki. 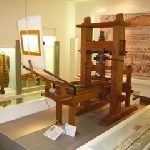 The Letterpress printing machine, which was brought here by the Tensho Embassy to the Pope and the kings of Europe in 1582, left Japan and moved to Macau, Philippines, after the decree of prohibition on Christianity was published in 1614 by Tokugawa Ieyasu (1543 – 1616), the founder of the Tokugawa Shogunate.
However, the books of Japanese studies were printed and published in Macau, which were used as references when Japanology became popular in 19th century Europe, 200 years later. This museum has a large collection of Banban culture, European Culture materials, and exhibits a reproduction of its letterpress printing machine. 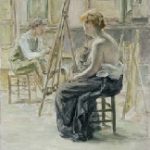 The museum collects and exhibits the works of local and international artists since the end of the 19th century.
Kuroda Seiki (1866 – 1924) a Japanese painter and a leader of the Western-style painting movement, was born in Kagoshima and went to France at the age of 17 to study law. While there, he become a painter. After returning to Japan, he introduced Japan to the light-colored Gaikou-ha, a Japanese painting style based on Plein Air, which adapted the changing light and subtle elements of impressionism.
He became known as the father of modern Japanese painting. Kuroda also created a concept drawing that consolidates the philosophy of Western Academism. He launched the Western-style painters group, Hakuba-kai, to hold exhibitions of their works, and developed the philosophy of beauty.